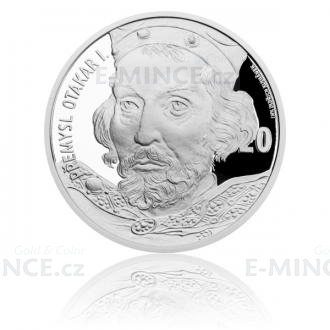 For the past 7 years, the Czech Mint has issued a tribute to Czech banknotes. Emerging from the workshop of graphic designer Oldřich Kulhánek, are among the finest in the world, in the form of silver commemorative medals. The eighth and final mintage of this cycle reminds of Ottokar I., well known from banknote with a value of CZK 20.

When Premysl Ottokar I. sat on the royal throne, his country was plagued by corruption and subversives, enemies both domestic and foreign.  He was not going to accept this, and wanted to introduce order - inter alia because he was the first Czech king, his descendants should would also inherit his title. In achieving the goals, he was uncompromising. His diplomatic skills and military prowess helped him a lot. His balance allowed him to enter into profitable agreements, but he removed the obstacles that stood in the way with no remorse. When he was dying he handed to his son Václav I. a country within a peaceful and harmonious, outwardly respected and feared. Rightfully  is Premysl Ottokar I. perceived as the creator of the strong Czech kingdom.

The silver medal, which pays tribute to him, was jointly prepared by two artists. The first is a talented graphic designer MgA. Klára Melichová - the daughter of the late Oldřich Kulhánek - who has prepared the the composition of both sides of the medal. The second is an experienced academic sculptor and medal maker Vladimír Oppl, who has created the embossed model for this mintage. The obverse side of the medal bears a portrait of the crowned statesman with a beard, a text PŘEMYSL OTAKAR I. and the numeral 20, which refers to the draft of the medal in the form of CZK 20 banknote. The reverse side belongs to the royal crown, the ribbon decorated in Gothic style and the Seal of the Golden Bull of Sicily, of which the descendants ensured the hereditary right to the Czech throne.

Remind yourself of motive of a charming banknote, which can not be found in your wallet anymore!
Related products