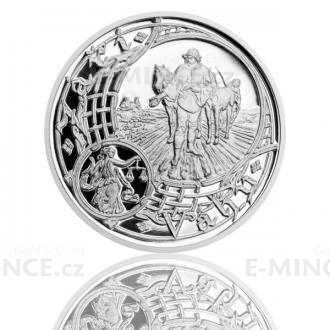 The ninth silver medal from the cycle of the Czech Mint the Astronomical Clock inspired by Josef Mánes is dedicated to the month of September and the appropriate sign of the zodiac - Libra.

The work on the calendar board of the astronomical clock was a prestigious contract for Josef Mánes. Although it was not sufficiently specified and the promised honorarium was only half compared with the required, the painter wanted to devote a truly monumental work to Prague. During the whole time of the creation he had to face the criticism of dignitaries, unsuitable conditions for work and the whims of bad health. When he has finished his work, the whole world was astonished. However, Mánes did not attend the unveiling ceremony due to a severe illness. Perhaps the legendary curse, that will befall anyone, who intervenes with the Astronomical Clock has struck?

The silver medal traditionally comes from the studio of the precise academic sculptress  Daniela Kartáková. Its obverse side features, just like the real astronomical clock, which was her model, two circular compositions. The larger circle is an allegorical depiction of the month of September symbolized by a farmer, his assistant and two horses seeding grain into a prepared furrows. On the background is evident a silhouette of Trosky castle. The smaller circle belongs to September's astrological sign - a girl in flowing dress, carrying a sign of Libra. The whole scene is complement with a decorative inscriptions September and Libra. / Září and Váhy /

The reverse side is common to all the medals from the cycle - it is dedicated to a painter with palette and set of brushes standing in front of his masterwork and is complemented with inscriptions Josef Mánes - the Astronomical Clock. / Staroměstský orloj /

In the menu of the Czech Mint you will also find a collector's album, which holds a total of twelve medals and lets you compare the relief depictions of his two-dimensional draft.