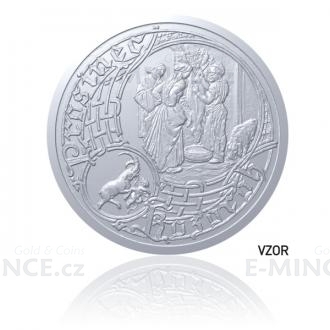 A collectible series of the Czech Mint Old-Town Astronomical Clock represents a silver medal with the motif of December and the sign of Capricorn.

The Astronomical Clock is a mysterious building tied up with a lot of legends and superstitions. When Josef Mánes won the contract for the formation of his calendar plate, the carver Josef Worlíček tried to dissuade him. According to an ancient prophecy, everyone who went to work on the astronomical clock, went mad or soon died. But not only the painter was in danger -  the astronomical clock was not in working order for many years, and if repaired, apparently the Czech lands would be afflicted by disaster. Mánes, however, ignored the warnings of his close friend and created a monumental work with a rural allegories of calendar months and signs of the zodiac. Whether it was a coincidence or a real curse, the prophecy was fulfilled. The astronomical clock was finally opened in 1866, when the Prussians invaded Bohemia, who defeated Austria in the war, and a cholera epidemic raged. Sadly Mánes met his fate - in the same year he began to show a symptoms of mental illness, the consequences were devastating. The founder of Czech painting died after several years of suffering, underestimated by his contemporaries. He received the deserved recognition in the 20th century.

To his admirers also belongs the academic sculpturesess Danieal Kartáková, who created the series of medals inspired by the calendar clock plate. The obverse side of the medal bears two targets. The larger is an allegory of the month of December - a form of rural abattoir, where a young housewife, along with a guest and a dog watch the butcher carve the slaughtered pig. The smaller target belongs to the December zodiac sign - Capricorn, which complements the putt ie. decorative baroque angel. The reverse side, that is common to all the medals from the series, bears the painter standing before his masterwork and is complemented with an inscriptions JOSEF MÁNES – STAROMĚSTSKÝ ORLOJ. /The Old-town Astronomical Clock)

Do not miss the collectibles album, which will introduce you to Mánes’s original paintings in all their glory, and where you can store your collection of all 12 silver medals. You can find it in the offer of the Czech Mint.