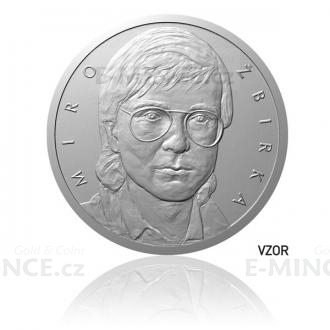 The collectible cycle of the Czech Mint called "Nightingales in gold" welcomes the fifth legend of Czechoslovak music scene. This silver medal belongs to Miro Žbirka, whose fame has spread far beyond the country's borders.

Miroslav Žbirka was born to the Slovak father and English mother sixty-five years ago, they met in London after World War II and settled in Bratislava. It was his mother who brought little "Meky" to music. His older brothers Jason and Tony helped her, because they were music-oriented as well. The Beatles belonged to the first bands whose songs were played on the guitar by future Golden Nightingale. "If I did not hear their songs as a boy, I would probably not be in a popular music. I would have became a football player or something similar, " jokes the singer. Thanks to growing up in a bilingual household he learned to speak English fluently, and he often used it during his career. He succeeded at home scene as well as abroad and fulfilled his dream of recording at the legendary Abbey Road Studios in London. On the grounds of that he was compared with a great bands such as the Beatles, but also other greats - Pink Floyd, Deep Purple and U2.

A well experienced medal maker and portraitist MgA. Martin Dašek has dedicated the obverse side of the silver mintage to the portrait and name of this charismatic singer. The reverse side of the medal bears the head of the guitar – it is supplemented with iconic glasses which are an integral part of the singer's image, together with an inscription GOLDEN NIGHTINGALE 1982.

Do not miss the collectible etui in which “Meky“ is placed alongside other stars of Music Hall of Fame.