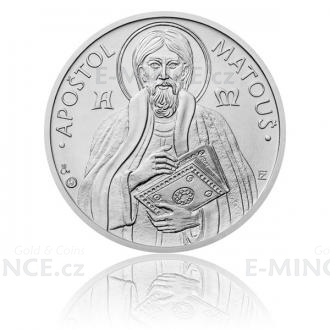 Evangelist Matthew appears as the seventh of the twelve Christian apostles on the silver memorial medals from the Czech Mint. This is evidence that God can manifest himself in every person - regardless of his or her actions.

Saint Matthew is known only in outline, although he was one of four authors of the canonical New Testament gospels. He was born in Galilee most likely as Levi, and he accepted the name Matus later on. He worked as a tax collector, and his compatriots despised him, because he was involved in the oppression of his own people by the Romans. This is why Jesus Christ called him among his disciples and Matthew became the symbol of unconditional conversion, life change and true follow-up. He became the first evangelist as eyewitness to the works of the Lord. Firstly he reported the gospel to the Jews in Palestine and, after creating the Aramaic version, went to spread Christianity among the non-believers. However, he was not sure where to go. He probably traveled through Macedonia, the Black Sea, Arabia and the Caspian Sea. He lived in African Ethiopia for 25 years, which was fatal for him. He turned faith to the local Governor Egipp, who soon died. The pagan Hirtak took over the government and wanted to marry Egipp's daughter Iphigenie, a religious woman, however, she refused marriage and the sovereign decided to avenge Matthew. He was wounded by a spear and so became a martyr.

The medal maker and expert sculptor Zbyněk Fojtů became the author of this commemorative medal. The obverse side was devoted to St. Matthew's half-structure. He has a halo over his head and holds his attribute in the form of a book symbolizing the gospel. The inscription bearing the apostle's name is complemented by the decorative initials. The reverse side of the medal is devoted to the book, this time in the hands of an angel who, according to legend Matthew, dictated the words of his gospel.

Each of the dozen disciples of Christ has its place in an attractive collector´s album, stylized in the form of script, dominated by the fresco of the Last Supper of the Lord Leonardo da Vinci. The album represents individual apostles as patrons and protectors and you can find it on offer at the Czech Mint.