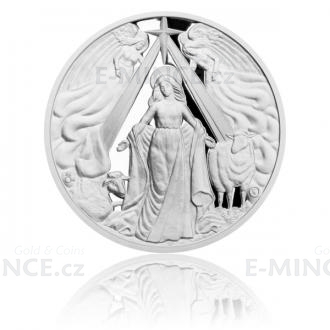 None other, than Jesus could launch the series of silver commemorative medals of the Czech Mint with a Christmas theme called Bethlehem. Now comes the second most important figure of the story about the birth of Jesus - his mother, the Virgin Mary.

A young girl named Mary was from a Jewish family of King David. The Archangel Gabriel appeared to her and told her, that although she is still a virgin, she will become the mother of the promised Messiah.

Her betrothed - a carpenter Joseph - took her and her baby as his own on the advice of an angel. When they went to their hometown to honor the proceeds of the census, they were forced to spend the night in the barn in the Judean town of Bethlehem and the rest is history…

The author of the entire series that, besides the Holy Family will also present the Three Kings, is a talented medaillist Mária Filová. She has plenty of experience with the Christian themes - besides Bethlehem, she has transferred also the apostles Andrew and Philip into a small sculptures. She dedicated the obverse to the Virgin Mary, surrounded by the animals of Bethlehem, the angels of the Lord and the starlight, which heralded the birth of the Savior. The reverse side of the medal is decorated with a fourteen point star, complemented with an inscription Star of the Church of the Nativity in Bethlehem. The star in this ancient sanctuary reminds the exact place where Jesus came into the world, and symbolizes the fourteen stops at the Way of the Cross.

The Virgin Mary can be stored alongside her son and husband in the collector's album in the form of Christmas crib, which is also a part of the offer of the Czech Mint.