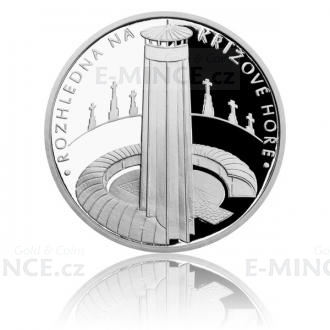 The cycle of silver commemorative medals from the Czech Mint called the Lookout Towers presents its penultimate addition whose motif is the observation tower on Cross Mountain in the Pardubice Region.

A pilgrimage church has been on Cross Mountain since the first half of the 19th century. Its tower gave a view of the landscape, so it is no wonder that almost two centuries later, a modern observation tower was built on the site of this destroyed sanctuary. It takes the form of a twenty-five-metre reinforced concrete tube with 130 steps, reinforced by eight vertical ribs. From the height of 735m above sea level there is a beautiful view of the Red Water, the hills of the Bukova hora highlands opposite, while good visibility enables you to see Kralicky Sneznik. Below the observation tower there is an indoor area for cultural and social events. The original dominant of the Cross Mountain is commemorated by the church plan engraved on the pavement.

All these details can be found on the commemorative medal made by academic sculptor Zbyněk Fojta. The obverse side of the medal is dedicated to the overall view of the building (including the enclosed space and the church plan) completed by six crosses symbolizing the ancient way of the cross to the top of the mountain. The reverse side of the medal bears another cross whose predecessor named the mountain, together with a detailed view of the ribbed tower tube. The inscriptions on both sides of the coin indicate the name of the lookout tower, its height and altitude.

You can store The Tower on the Cross Mountain with 11 other medals in the elegant collector's etui also offered by the Czech Mint.