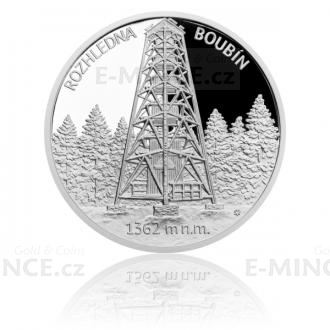 A collectible series of silver commemorative medals the Look-out towers of the Czech Mint represents another tourist attraction in southern Bohemia -  the modern look-out tower Boubín.

After the look-out tower of Josef on Kleť, which has already appeared on a commemorative medal from this series, Boubín was declared the second most beautiful look-out tower of the South Region. And it is not only its "best".  It is located in an altitude of 1362 meters and is the second highest look-out tower in the Czech Republic. (the first place belongs to the television transmitter Praděd with 1567 m n. M.). Thanks to its location it offers a view of the entire panorama of the Šumava Mountains as well as of the heart of Bohemia. If you're lucky, you can even glimpse the distant Alps, which are 200 kilometers away.

The author of the artistic design of this silver mintage is a talented medal maker Asamat Baltaev, DiS. The obverse side of the medal presents a view on the look-out tower from the bottom - the structure of spruce logs rises above the surrounding trees.The composition is completed with an inscriptions ROZHLEDNA BOUBÍN and 1362 m n. M. The reverse side is then traditionally given to the outlook from the look-out tower. The author used the mountain panorama to indicate the dominant peaks, that can be seen from the observation deck of the tower - these include SOLOVEC, BOBÍK, LYSÁ, KLEŤ, KNÍŽECÍ STOLEC, ŠPIČÁK, CHLUM, JEDLOVÁ HORA and VÍTKŮV KÁMEN.

In the assortment of the Czech Mint you will also find a luxury collectible etui in light wood, where you can store a complete collection of all twelve most beautiful Czech look-out towers.