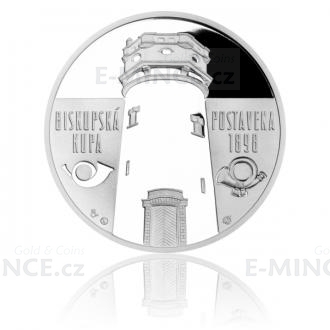 During its existence served the Biskupská kupa a number of purposes. During both World Wars was used as an observatory of the aerospace and at the time of socialism played the role of a television converter, but the original and primary purpose is to provide a view of the landscape. That is why the Czech Mints eighth silver commemorative medal from the series Look-out towers belongs to this tower.

The look-tower stands on the top of the hill of the same name with a height of 890 meters above sea level. Since 1875 it has changed its appearance multiple times - from a piled stones, that were dismantled from the official regulation, through an extravagant wooden pyramid, which was destroyed by a whirlwind, to the stone structure as we know it today. A visit of the oldest look-out tower in Jeseniky diversified the presence of the mountain post office and the tourist Rudolph's cottage. To the entrance to 19.3 meters high tower leads 5 stone steps and in the look-out tower await the tourists another 90 steps. The wooden staircase spins in a clockwise direction and at the end the trippers are rewarded with a view in all directions, which allows to see the dominants of Czech Republic and Poland.

The reverse of the commemorative medal from the studio of the popular medalist Luboše Charvát is dedicated to the technical specifications of the look-out tower. A stylized staircase is complemented by the text "Kaiser Franz Josef Warte", ie. The look-out tower of the Emperor Franz Joseph. The stone tower was inaugurated on the occasion of 50 years of the reign of the Austrian emperor. The opening year 1898 along with the name of the look-out tower complement its faithful depictions on the obverse side of the medal. The composition is completed with two musical horns - one historical and one modern - symbolizing the role of our oldest mountain post office.

The Biskupská kupa, along with 11 other look-out towers, can be stored in an elegant etue made of light wood, which can be found in an assortment of the Czech Mint.