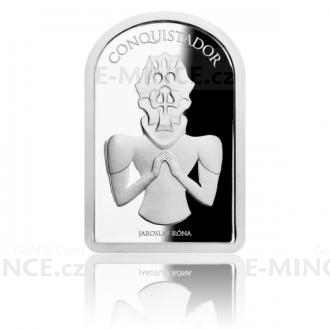 The sixth silver medal of the cycle of the Czech Mint called Art for Václav Havel is inspired by the artwork of Jaroslav Róna. His Conquistador arose after the Velvet Revolution, when the sculptor and painter could go on a journey to exotic countries. "A sense of inner fear still prevailed in me in the eighties,“ recalls Jaroslav Róna the last decade of the totalitarian regime. It was Václav Havel, who helped him to overcome his fears. "Our meeting took place more or less randomly in the restaurant Paroplavba on the Vltava River, sometime in 1988. Václav Havel, who was until then a mythical figure for me and I also doubt a little that he even existed, then invited us to his home. On leaving I had then asked for a souvenir, memory and proof that I had not imagined it. I asked for a painting, allegedly the only one, that he has ever painted. I went home in euphoria, with a picture in my hands, happy that I broke my fear of contact with the dissidents."

After years, the artist now repays Václav Havel and his generosity, in collaboration with the academic sculptor Vladimir OPPL. In his honor they have prepared an original commemorative medal of a non-circular shape.

Its obverse side bears the theme of one of Ron's sculptures. The motive of Conquistadora - an armored Spanish conqueror of America without a face - arose after the fall of the Iron Curtain, when the sculptor could freely travel abroad and visited Mexico, whose culture captivated him. The reverse of the medal is then dedicated to the Prague Crossroad, which is the main motive the entire series. This social center is housed in the church of St. Anne, whose rescue became one of the last wishes of Václav Havel. The proceeds from the sale of the commemorative medals, in whose issuance is involved the Dagmar and Václav Havel Foundation VIZE 97, helps to meet this desire.

The first 200 pieces of a total of 600 pieces is hand numbered on the edge - do not hesitate!