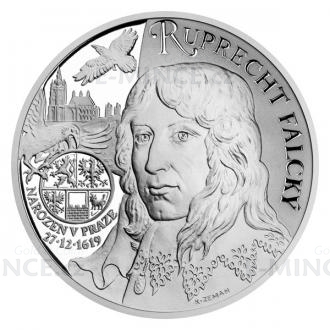 It is said that when Rupert of the Rhine, the Czech monarch and leader of the Protestant Union, fled the country after losing the Battle of White Mountain, he almost forgot about his greatest treasure - his 11-month-old son Rupert, who was born in Prague in 1619. If one of the footmen had not returned for the little prince, history would have been deprived of the fascinating life story of a Czech native. The descendant of the "Winter King" grew into an extremely intelligent, handsome and capable man in exile, who quickly gained a reputation as a fearless warrior and brilliant tactician. He fought against the Habsburg emperor Ferdinand III, the English military leader Oliver Cromwell and the Dutch admiral Michiel de Ruyter. He served the English kings Charles I and II. and Louis XIV, the French "King of the Sun". He excelled as commander of the cavalry and navy. Although he went from battle to battle, he did not want to fight. "A soldier's life is full of honor, but even a dog would not live it," is written on his tombstone. Once wars of the 17th century - the Thirty Years' War, the English Civil and the Anglo-Dutch - had subsided, Ruprecht settled down and finally found time for his many peaceful interests: He founded the Royal Scientific Society and the Hudson's Gulf Fur Society. He invented the torpedo, the forerunner of bulletproof glass or surgical instruments for skull surgery. He broke through ciphers, was a phenomenal engraver and painter.

"I portrayed Rupert of the Rhine at a young age on the obverse side of the medal. The time separates the portrait from the Church of St. Vitus, in which the prince was baptized. A raven hovering over the building symbolizes the time of Ruprecht's birth and the barbaric cleansing of the cathedral from rare artworks. The second raven is a raven from Bílá hora, which pecks into the emblem of the lands of the Czech Crown, which includes the emblems of Upper and Lower Lusatia. The Czech Crown lost them as a result of the battle and the ensuing war, ” academic painter Karel Zeman explains. The reverse side of the medal is divided by the chain of the Garter Order, which Prince Ruprecht wore. The cavalry battle at the bottom commemorates the prince's achievements when he was commander of the cavalry. At the top there is the triumph at sea - admiral Rupert as commander of one of the three English squadrons won the Battle of Lowestoft.

Each medal includes a spectacular certificate of authenticity that contains an accompanying word by Karel Zeman, together with a historical text.

Note: The author decided to change the issuance plan of the History of Warcraft cycle. The medal with the motif of the Battle of Hannibal on the river Trebia will be the eleventh one.
Related products