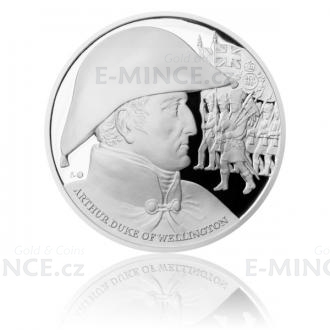 A spectacular collector's series History of Warfare reminds wide range of military engagements that changed the history. Among them, of course, can not miss the Battle of Waterloo, which marked Napoleon Bonaparte`s final defeat. It took place just 200 years ago, on 18th June, 1815 and the Czech Mint dedicated an exceptional one-ounce medal made of pure silver to this anniversary.

The Battle of Waterloo went into the history as the decisive bloodbath of Napoleonic Wars. Legendary battle of seven European armies was the reason of the defeat of France, Napoleon's abdication and then the decline of the first French Empire. French Armée du Nord was defeated by the Duke of Wellington and the Emperor's fate was sealed by his internment and death on the island of Saint Helena.

The site of the battle is decorated with a monument, nicknamed Lion's Mound. Its dominant feature is the statue of a lion symbolically baring its teeth towards France. Every year, the reconstruction of the battle, with the participation of a large number of military clubs, including the Czech clubs, takes place there. The mintage with contemporary motifs are among the most popular ones amongst numismatists and this is a proof of the fact, that the Czechs love the history. Great interest in the medal series History of Warfare, which is so far presented by the assassination in Sarajevo and Charlemagne, is a clear proof it. The author of the luxurios issue is traditionally academic painter Karel Zeman. The correctness of this choice is demonstrated not only by the amazing design of these medals, but also by the fact that the author personally took part in the reconstruction of the Battle of Waterloo. He made good use of his impressions by creating both sides of the mintage. The obverse side of the coin features a portrait of the victorious Arthur Wellesley, 1st Duke of Wellington, accompanied by Scottish Highlanders from the 92nd Regiment led into the battle by a bagpiper. The reverse side of the coin is dedicated to the representation of a strong moment, when Sergeant Charles Ewart took possession of the French eagle of the 42nd Regiment, which was called "invincible" until the crucial Battle of Waterloo.