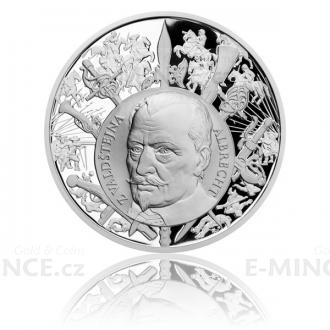 The authorial cycle of silver medals History of Warcraft by the academic painter Karel Zeman presents Albrecht von Wallenstein - one of the most powerful men of his time and an outstanding commander - in the pivotal battle of Lützen of the Thirty Years War.

On November 16, 1632 in the vast expanse near a German town, the Catholics stood against each other. Headed by the Czech nobleman Albrecht von Wallenstein, the Protestants led by the Swedish King Gustav II. Adolf. They both were equal masters of war craft and their armies were comparable as well, which foreshadowed the outcome of the bloody conflict. Nine thousand men fell on the battlefield that day. The Catholic League lost one of the most famous imperial officers  - the Field Marshal Pappenheim, however, the Swedes suffered even greater loss - their king, who commanded the battle from the first line fell himself. Wallenstein, who personally led the counterattack against the rapidly advancing enemy, was wounded and eventually had to retreat. Although the Swedes took possession of the battlefield, it was a tragic example of a Pyrrhic victory. Wallenstein received imperial praise for his actions at Lützen, but the clouds began gathering over him at that time as well.

And how has the academic painter Karel Zeman depicted the battle? The obverse side of the medal is dedicated to the course of bloody battle - it depicts the clash of musketeers and pikemen. The scene is dominated by portrait of Albrecht von Wallenstein in a circular field surrounded by cold firearms. The reverse side of the mintage symbolizes the outcome of the battle - the death of the Swedish king, who was thrown from a horse, as well as countless men of both warring parties in the form of entwined skeletons. The text on reverse states LÜTZEN 1632, GUSTAV ADOLF MORTUUS EST  - or "Gustav Adolf is dead."

Part of each medal is a narrative certificate of authenticity to help you understand course of the battle and its main actors, it also contains the word of the author of the mintage.