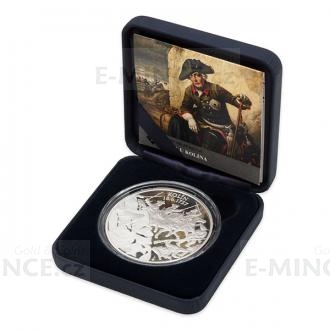 Waiting for Karel Zeman supporters is over. Another silver medal of the Czech Mint from its author´s cycle History of Warfare is here. It is dedicated to a magnificent battle at Kolin together with count Leopold Daun.

The Seven Years War, the world's first conflict of human history, affected several continents and oceans in the 18th century. However, its decisive weight consisted of a struggle between the Prussian kingdom and the Habsburg monarchy. After a series of overwhelming victories, the unpunished Prussian regiments stood in front of Prague, and terrified the Austrian empire. There was only one man who could reverse the unfavorable course of the war and tip the scales in favor of the Empress Maria Theresa. He was named Marshal Leopold Daun, a veteran of the campaign against the Ottoman Empire and the Wars of the Austrian Heritage. He and his soldiers had the task of hindering a possible Prussian invasion to Vienna, but he heard the monarch calling and pulled west. This obviously did not miss the attention of Prussian King Frederick II, who, in anticipation of a decisive conflict, faced his enemies and attacked them in the direction of Kolin. The Army of the Masters of the Martial Craft crashed on June 8, 1757. The Prussians attacked the Theresian army and thrust a massive wedge into it. The situation did not develop well and it seemed that the well-trained and disciplined Prussian soldiers could not be stopped by anything. However, the "callow youths“, the Austrian Dragoon Regiment consisting of youngsters whose teen's enthusiasm surprised the enemy and roused the fellow fighters to counterattack, invaded the battle. Fridrich II. was defeated for the first time, his men retreated and Bohemia was saved.

"I depicted Leopold Daun sitting on a horse on the obverse side of the medal. He is dressed in Rococo Field Marshal uniform, with a Marshal stick in his right hand. The Maria Theresa Grand Cross hung on the matching ribbon is in the first plan of the reverse ​​side of the medal, The day of establishing this order, which became the most important military distinction of the Habsburg monarchy, was determined by the date of the Battle of Kolin, and Field Marshal Daun became his second bearer, " explains academic painter Karel Zeman. The second plan of the reverse side of the medal depicts the dynamic battle scene that is reigned by the "callow youths."

Each medal includes spectacular certificate of authenticity, which includes the accompanying word by Karel Zeman and a treatise on the course and meaning of the battle.
Related products