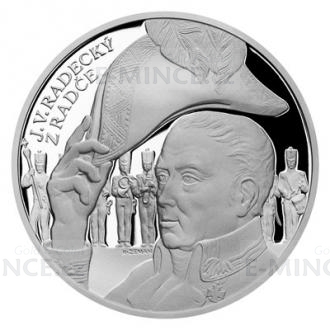 “It is regrettable that although Vienna can boast a bronze monument of Count Radetzky of Radetz, the Prague one from Malostranské Square is still in a lapidarium. Therefore, I decided to dedicate this medal to one of the greatest commanders who came from Bohemia. ” Karel Zeman says. The ninth silver medal from the series History of Warcraft pays tribute to triumph of Radetzky at the Battle of Custoza.

“I swore to the Emperor, my lord, that I would defeat the enemy and defend his throne and rights. I will remain faithful to this oath until the last breath. I will mourn the blood that must flow, but I will spill it. Then I will let the other world judge me, ” Field Marshal Radetzky said. This quotation illustrates how boundless he was to the monarchy that began to be influenced by nationalist passions in 1848. When the desire of blasphemous nations for self-determination grew into an armed uprising against the Habsburgs, Radetzky commanded troops in the Lombardy-Venetian Kingdom in Italy. Charles Albert, king of the neighboring sovereign Sardinian kingdom, decided to unite the fragmented Apennine peninsula in order to become the ruler of all Italians. He sent a hundred thousand army to his brothers suffering under the Habsburg supremacy. However, well-fortified Radetzky survived the attacks of Sardinian army. No wonder he had decades of experience, including those he had gained in the Napoleonic Wars. Once field marshal managed to get support from Vienna and collected 40 thousand men, he went to counterattack. He did not attack the main forces directly, but he gradually liquidated the enemy. The decisive clash then took place near the city of Custoza on 25 July. Although the Austrians stood against 70,000 Italians, their rapid advance surprised the enemy. The attempt to invade Italians from the back did not succeed and the Austrians gained superiority over the surrounding villages and access roads in a long series of fights. The eighty-one-year-old marshal did not hesitate to support his men in the front line. Charles Albert was forced to retreat and shortly thereafter declared a truce. He repeated his attempt the following year, but Radetzky definitively thwarted his efforts.

The reverse side of the medal was dedicated to the scene from the battle of Custoza - in the foreground there is a military trumpeter playing signal to attack, in the background there is a clash of another Austrian trumpeter with a Piedmont rider. On the obverse side there is a depiction of field marshal when greeting with raised hat. “When thinking about the proposal for a medal of Count Radetzky of Radetz, I always heard the melody of Radetzky marsh in my ears. Therefore, I portrayed him after returning from the victorious campaigns in Italy, when he was welcomed by a military band with this piece composed by Johann Strauss the Elder in September 1849, ” the author of the medal and academic painter Karel Zeman explains.

Each medal includes the spectacular certificate of authenticity, together with a historical text and accompanying word of Karel Zeman.