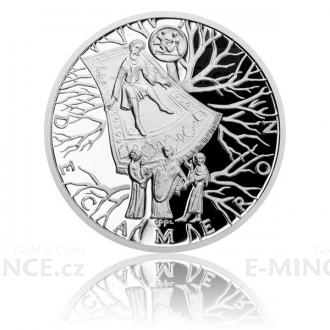 The ten-part series of silver medals from the Czech Mint, which is inspired by the Renaissance short story collection Decameron written by Giovanni Boccaccio, is now concluded. The narration of the tenth day is full of human generosity, confusion, disguises, but also black magic.

The story takes place during the time when Christians made the great crusade to conquer the Holy Land. The wise sultan Saladin decided to go to Europe to meet his enemies and prepare for their invasion. On his way to Lombardy, the monarch met a knight in disguise named Torello d'Istria da Pavia, who, to his astonishment, welcomed him and treated him like a prince. Saladin and Torello said goodbye in a friendly way. The Knight had no idea who he had met, and shortly afterwards he went on a crusade. Even before, however, his beloved lady had to promise him that if he fell in battle, in a year, in a month, and a the day she would marry again. Torello did not fall, but he was captured and considered dead. In captivity he met Saladin again, and after a while they both realized they were actually familiar to each other. The unveiled sultan Torel returned his former hospitality and provided him with luxury. However, the European wanted to return home where his wife should have been married. The Sultan, therefore, had him immediately relocated to Pavia with the help of spells. Torello, this time alone, dressed so to be unrecognised and appeared at the wedding. His beloved, however, did not let him be fooled by his exotic appearance, and remained happy until death.

The obverse side of the medal captures the knight's way home. The academic sculptor Vladimir Oppl gave it the form of a flight on a magical carpet. Torello with a beard is dressed in oriental dress, wears a turban on his head when heading for a wedding where the priest marries his wife. At the top of the obverse side there is another scene - a Roman spintria, an erotic token used in ancient Italy as a tender in the whorehouses. This, along with the tree of life, is placed in the background of the obverse side as a common element of all cycle mintages. The reverse side of the medal is dedicated to the author of Decameron Giovanni Boccacco and the Italian town of Certaldo. The building on the left side of the reverse side is the historic town hall, while the house where the artist created, occurs in the right part. Years 1313, 1375 and 2013 mark Boccacco's birth, death, and 700th anniversary of birth, on which occasion a series of commemorative medals were issued.

A complete Renaissance series can be found in the eye-catching collector's album, which you can also find on offer at the Czech Mint.