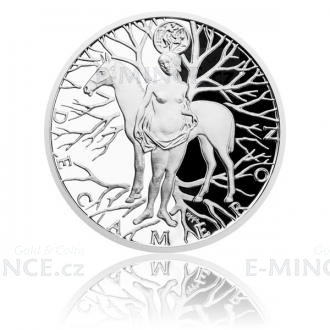 The ten-part series Decameron of the Czech Mint, which is based on a set of one hundred novels written in Renaissance times by Giovanni Boccaccio, welcomes its penultimate increment. On the silver commemorative medal comes alive a ticklish story of ninth day called The Magic.

Two friends, a glorious master Gianni di Bardo and a godfather Peter of Tresanti, practiced the same craft. They attended fairs and visited each other. During one visit at Peter`s, who had a beautiful wife Gemmata, Gianni jokingly said, that he could turn a mare into a woman and back again - it depends on what he needs just now. The couple, which was not one of the smartest, asked him to turn Gemmata into a mare, so she would helped Peter with the business. Gianni was reluctant, but the couple was insistent. The astute glorious lord thus prepared a fictional incantation, providing the fact, that Peter can not speak, otherwise the spell will fail. While Gianni was "attaching tail" to the nude future mare, Peter loudly complained and ruined the "magic". Gemmata scolded her husband, because he deprived them of earnings and the only one, who was satisfied, was Gianni.

The author of the visual image of the entire collectible series is an academic sculptor Vladimír Oppl and the ninth mintage is no exception. The obverse side is dominated by the naive Gemmata in all her glory, whose nakedness covers only a strip of cloth. Behind her stands the longed mare and further in the background then the mythical tree of life, which spreads throughout the entire cycle. Another motive of the obverse side is the so called Spintriae, a token with erotic motif, which was used as currency in brothels of ancient Italy. The reverse side of the mintage is dedicated to the master of writing Giovanni Boccaccio and his hometown of Certaldo (a building on the left is a historic town hall, on the right then stands the artist's house). The years 1313, 1375 and 2013 commemorate the artist's birth, death and the 700th anniversary of his birth, the occasion, on which the series of these commemorative medals begun to be issued.

You will also find an intriguing collectible album decorated in Renaissance style in the menu of the Czech Mint.