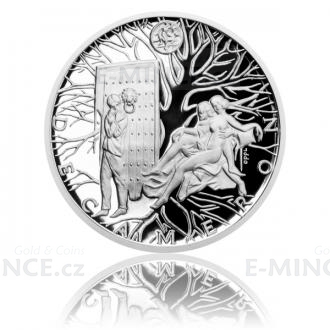 The series of ten silver medals from the Czech Mint called The Decameron draws its inspiration from the immortal set of hundred renaissance novels written by Giovanni Boccaccio. The individual stories are about love and passion, but also about betrayal and revenge. Neither the seventh story of the eighth day, that tells a noble lady Pampinea, is no different.

Scholar Rinieri fell headlessly in love with a young florentine widow Elena. She, however, was faithful to her lover and along with him has decided to have fun on Rinieri’s account. She invited the scholar to her home under a romantic pretext, while indulging in erotic adventures with her real lover, let Rinieri stand at the door in the snowdrifts. He anxiously waited until the very morning, when he finally saw  Elena’s game and vowed revenge. When after some time the lover left Elena, she turned to Scholar asking for the magic potion, that would return him to her. Rinieri seized the opportunity and prepared a false incantations. Desperate Elena followed his advice and let him to trick her - in a retribution she remained completely naked stuck on the turret, where she was exposed to a scorching sun and a troublesome insects.

The obverse side of the silver medal is given to the scholar’s humiliation  - a cold youngster standing behind closed doors, on the other side is Elena hugging with her lover in the heat of passion.  At the top of the obverse is a placed one more erotic scene - it is a Roman Spintriae, a token used in ancient Italy as money in brothels. "Personally, I like to choose a bolder proposals. If a book can tolerate such an illustration, so why not the medal?" says the author of the medal, the academic sculptor Vladimír Oppl with a mischievous grin. On the background of the obverse you will find a tree of life, whose branches and roots intertwine through the whole series. The reverse side of the medal is given to the author of the Decameron Giovanni Boccaccio and the Italian city of Certaldo. The building on the left side of the reverse is the historical town hall, on the right side is then depicted the house, where the artist was creating. The years 1313, 1375 and 2013 indicate Boccaccio’s birth, death and the 700th anniversary of his birth, at which the series of commemorative medals begin.