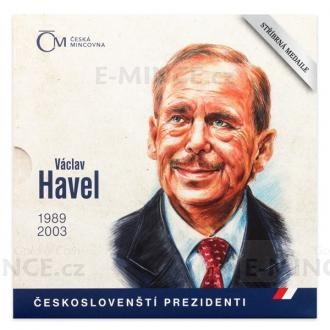 The collector´s series of the Czech Mint gradually introduced the Czechoslovak presidents Tomáš Garrigue Masaryk, Edvard Beneš, Emil Hácha, Klement Gottwald, Antonín Zápotocký, Antonín Novotný, Ludvík Svoboda and Gustáv Husák, men seeking truth and justice, and those who desired unlimited power. The ninth and last issue of the cycle belongs to Václav Havel, the world-famous dissident and playwright, who became the last Czechoslovak president and also the first president of the Czech Republic.

When the Velvet Revolution broke out in November 1989, Václav Havel stood in the forefront, and although he did not aspire to any political functions, he accepted a nomination for the President of the Republic. The fact that he was unanimously elected to this office by a parliament composed largely of communists was perceived as a small miracle. In Moscow, Václav Havel proposed the withdrawal of Soviet troops from Czechoslovakia, and the Warsaw Pact was dissolved on his initiative. He devoted himself not only to foreign policy but also to improving relations with the Slovak nation. His repeated efforts for reconciliation between the Czech and Slovak political representations, however, did not become effective, as in the whole former Soviet bloc, nationalist moods grew stronger. Václav Havel refused to participate in the collapse of the state he sworn in, and he therefore resigned from office. In the meantime, he was again elected head of state after the announcement of the independent Czech Republic. For the new country on the map of Europe it was a great advantage, as it was the world-renowned personality. In domestic politics, Václav Havel acted against unhealthy phenomena, and in the foreign policy he led the Czech Republic to firmly ground in Euro-Atlantic structures.

Academic sculptor Jiří Dostál, the author of the entire series of Czechoslovakian presidents, donated the obverse side to the faithful portrait of Václav Havel, surrounded by his name, the years of 1936-2011 and the inscription THE SYMBOL OF DEMOCRACY AND FREEDOM. The initial letters of the presidential names were highlighted. "V" symbolizes the victorious „vee“, Havel's characteristic gesture. The "H" evokes a window - a barrier representing the lack of freedom and open to the world. "On the reverse side there is the republic. In the first plan centre there is a national emblem from the beginning of Havel's presidential term, which is covered by a sign of the Czech Republic corresponding to the term of the final term of office. The text PRESIDENT is highlighted and follows the three phases of the name development of the republic: THE CZECHOSLOVAK SOCIALIST REPUBLIC, the "dashed" name of the CZECHOSLOVAK FEDERATION REPUBLIC and the CZECH REPUBLIC. The bottom description describes the date of the term of office, and above it there is a linden leaf symbolizing the democratic choice. The matte surface of the Czech Republic emblem is identical with the surface of the Czech part of the territory of the state, " explains the medal maker.

The silver medal is traditionally stored in a sophisticated packaging in the form of a book that includes the thematic essay by historian PhDr. Petr Koura, Ph.D. A complete collection of all nine Czechoslovak presidents can be stored in a practical collector's box, which you can also find in the offer of the Czech Mint.