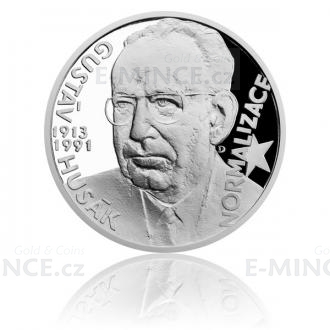 The eighth addition to the series of silver medals of the Czech Mint called Czechoslovak presidents was dedicated to Gustav Husak, the only Slovak and the last representative of the communist regime, who became the head of Czechoslovakia.

A communist activist and functionary Gustav Husak experienced, like his predecessors Zapotocky and Novotny, a long-term imprisonment. Freedom, however, was not forgiven by the Nazis, but by his comrades who sought traitors in their own ranks according to the Soviet pattern.  Husak avoided lifetime imprisonment due to the amnesty, but he still spent one decade in prison. He then cleansed his name and began to shape himself as a protector of the Communist leadership. A follower of the reform wing, who was considered one of the "men of the Prague Spring", soon turned. In the meantime, he became the head of the party that turned to him 18 years ago , and at the same time he became the chief architect and ideologist of the normalization regime that persecuted its opponents and opressed the freedom of speech. This radical change was not the first or last during Husak's career. Although some witnesses describe him as an idealist who sincerely believed communist ideas throughout his life, most historians are not convinced of this claim. "Husak, in all his ascendants and falls, remained a man who desired power and was willing to sacrifice everything. He was able to change his views just like this. I can not agree with the fact that he has believed throughout his life everything that he asserted. During  a series of his public appearances he had to know well that he was not telling the truth, and he declared very often the exact opposite of what he claimed earlier, "says a specialist in our modern history PhDr. Petr Koura, Ph.D., who is the guarantor of the whole cycle and the author of the expert essay, which is an integral part of every medal.

The obverse side from the workshop of an expert sculptor Jiri Dostal presents the president's portrait with his name, dates of birth and death and the word NORMALIZATION in which the five-pointed star is wedged. The reverse side was described by the author himself: "The middle part of the reverse side is filled with the state emblem in its period form, below which is the area of ​​the territory of Czechoslovakia. The five-pointed star, spread out like a shadow, symbolizes the period of non-freedom. The text is PRESIDENT OF THE CZECHOSLOVAK SOCIALIST REPUBLIC and in the line the years 1975-1989. "

The medal stored in a special packaging in the form of a book can be stored in a practical collector´s box.