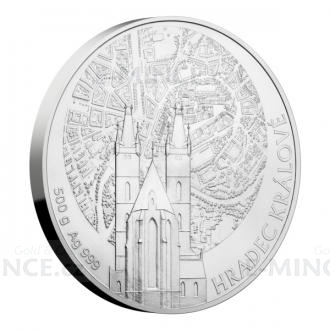 Hradec Králové is the administrative, cultural and spiritual center of northeastern Bohemia. It is also one of the current 26 statutory cities, which belongs to our most important settlements and to which the Czech Mint dedicated the series of silver investment medals minted from one half kilogram of pure silver.

The town has a number of renowned theaters, the university and several significant schools. Studied here have such a greats like Josef Kajetán Tyl, Karel Jaromír Erben, František Škroup, Alois Jirásek or Karel Čapek. Hradec is home to several historic architectural pearls. An example is the White Renaissance Tower, built in 1574, financed by the charity of townspeople, in which hangs the Augustin pendulous bell, our second largest bell. The most famous landmark of the city, however, is the Hradec Králové Cathedral.

In the 14th century Hradec became a dowry town of Czech queens who lived in the local castle as widows. As her residential town chose it Eliška Rejčka, which was loved by the urban dwellers. Apparently, it was her, who instigated and financially supported the creation of the magnificent Cathedral of the Holy Spirit. It is of interest that in 1424, Jan Žižka of Trocnov was buried here, whose side joined the city during the Hussite wars.

The sight of the Gothic cathedral with its two towers, which comes from the workshop of Irena Hradecká, DiS., is the dominant motif of medal. An incredibly detailed processing of an aerial view of the city is the artwork of Jakub Matouš, DiS. The author of a tasteful collage, that combines both motifs is Jan Petr, DiS. and thus the obverse side is the joint work of three gifted medallists from Jablonec.

The reverse side, whose author is MgA. Miroslav Schovanec, DiS., is common to all investment medals in the series - it carries a map of the Czech Republic, on which are highlighted all statutory towns. On the background are then listed their names.

Each of just 48 pieces of the silver investment medals is hand numbered on the edge.