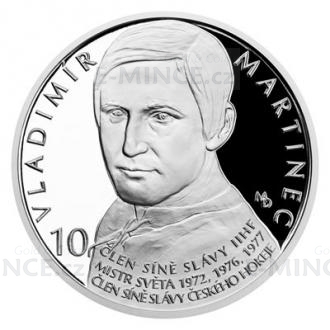 Vladimír Martinec contributed to the shine of the two most famous generations of our winter sport. He is therefore rightly entitled to the silver coin of the Czech Mint from the Legends of Czechoslovak hockey series.

The Czech Hockey school excels in its ingenuity, quick improvisation, technical and tactical creativity. Vladimír Martinec, who was famous for his original solutions to gaming situations, became one of its greatest classics. The unmistakable intuition that helped him find the right way out at all times, combined with a triumphant ear-to-ear grin, threatened his opponent - for example, he helped to defeat the Soviets three times during the world champion in the 1970s. Not surprisingly, hockey fans were in love with the optimistic and carefree boy for whom the game was everything. Vladimír Martinec also achieved great success later as a coach - for example, as an assistant to Ivan Hlinka, he contributed to the triumph of the national team at the "Tournament of the Century" in Nagano. “I still like hockey, even though I play a different role today,” said the legendary hockey player.

Reverse side of the commemorative coin, which was made by the medal maker MgA. Martin Dašek, presents a hockey player's portrait supplemented by his jersey number 10, together with an inscription VLADIMÍR MARTINEC, MEMBER OF THE HALL OF FAME IIHF, WORLD CHAMPION 1972, 1976, 1977, MEMBER OF THE HALL OF FAME OF CZECH HOCKEY. Since the Czech Mint coins are issued with the license of a foreign issuer, the State of Samoa, their obverse side bears its necessary attributes – the national emblem, the portrait and the name of Queen Elizabeth II, nominal value of 2 DOLLARS (WST) and the year of the issue 2019.