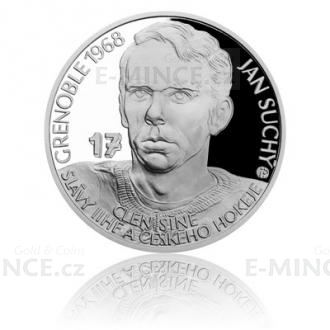 In the collector´s series "Legends of Czech Hockey" he represents the most productive and probably the best defender in the history of our ice sport. The silver coin of the Czech Mint belongs to Jan Suchý.

Jan Suchý, as the very first Czechoslovak beck, started to stand in the rifle range, which was very risky with the level of hockey equipment in the 60s and 70s. He scored countless wounds that would otherwise have been aimed at the goal. He lost his upper and lower teeth, suffered a tremor of his brain four times, and he stopped counting bruises, fractures and scars. Still, he never complained. No wonder the loving and sacrificial defender was loved by goalkeepers, at least those who played in his team. He was a thorn in the eye of the opponent's goalkeepers. He was acting like a "fake wing". From the defensive he went smoothly into the attack, torn a number of grids, and the defender reached remarkable recordings in shooting. In addition to the silver Olympic medal that he brought from Grenoble in 1968, he won four silver and two bronze medals at World Championship including bronze in the championship in 1969, when his goal helped to win over the Russians who had briefly invaded our country with tanks. The coin was made by Mgr. Petr Horák, who has a lot of experience with sport themes. On the reverse side there is a faithful portrait of the defender supplemented by his number 17 and inscription JAN SUCHÝ – MEMBER OF HALL OF FAME IIHF AND CZECH HOCKEY - GRENOBLE 1968. The coins of the Czech Mint are issued under the license of a foreign issuer, which is the state of Samoa, and their obverse side therefore contains its necessary attributes, which are the state emblem, the portrait and the name of Emperor Elizabeth II, the nominal value of 2 DOLLARS (WST), together with the year of the issue 2018.