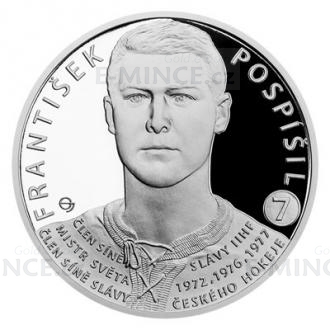 Collector's series of silver coins of the Czech Mint called "Legends of Czechoslovak hockey" commemorates the representatives of two big generations of our ice sport. Of course, František Pospíšil can not miss them.


The triple Olympic medal winner (silver medal from Grenobl 1968 and Innsbruck 1976, bronze medal from Sapporo 1972) and the triple world champion (1972, 1976, 1977) renowned as the calm and judicious player from behind positions. He excelled in perfect passes and at the same time had the ability to manage a team full of personalities. As the captain of the Czechoslovak champions he taught the Soviets in the seventies what it means to be defeated. However, the Czechoslovaks also punished western hockey players who did not take us seriously. The first international Canadian Cup was held in 1976, when the representatives from the heart of Europe shocked the homeland. The Czechoslovaks beat Canadians 1:0 in the first match and immediately became the center of interest and advanved to the final. Therefore, Toronto's leadership began to be interested in František Pospíšil. However, "Pospec" remained faithful to his Kladno and never regretted.

The reverse side of the commemorative coin, which is the work of an expert medal maker MgA. Josef Oplištil, presents a charismatic portrait of the defender, complemented by his name, his jersey number 7, together with an inscription of MEMBER OF THE HALL OF FAME IIHF – WORLD CHAMPION 1972, 1976, 1977 – MEMBER OF THE CZECH HOCKEY´S HALL OF FAME. The coins of the Czech Mint are issued under the license of the state of Samoa, and their obverse side therefore bears the necessary attributes of this foreign issuer, which means the portrait and the name of the emperor Elizabeth II, the national emblem, the year of the issue 2018, together with the nominal value of 2 DOLLARS (WST).
Related products