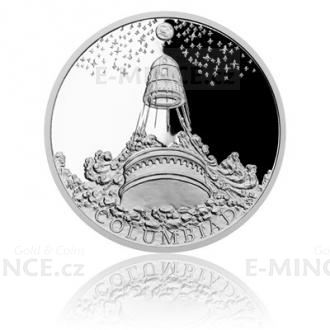 The four-part miniseries of the Czech Mint named Jules Verne's Fantastic World has led you around the world. The universe where the moon cannon Columbiad can carry you is the only place for adventure right after sea, air and land.

The president of the Baltimore shooting club convenes its members to familiarize them with their revolutionary ideas shortly after the end of the American Civil War. He believes he can build a cannon so powerful that it can reach the moon. The idea will inspire all the participants and preparations begin immediately. They count cannon, projectile, and gunpowder specifications, and try to get unimaginable finances for their space business. French adventurer who would like to become a passenger of their projectile and set out to visit our closest cosmic neighbor will have a surprise for them ... This is the story of Jules Verne's science-fiction novels From Earth to the Moon (1865) and Around the Moon (1870). The French writer miraculously managed to predict several real scientific facts. For example, a 270-meter-long cannon buried in the ground is located in Florida near to the real spaceport at Cape Canaveral, where Apollo 11 the crew of which actually reached the moon started hundreds of years later. Adventurers in the book, as well as today's astronauts, use rockets to correct the flight path, and their journey ends by landing on the ocean. Verne, however, made several mistakes when he underestimated the effects of overload, weightlessness and vacuum.

Asamat Baltaev, DiS., who is the author of the art form of the entire steampunk miniseries, depicted the moment of the start of the giant projectile on the reverse side of the coin. According to Vern's description the flame of the shot was observable within a distance of one hundred and sixty kilometers and all the viewers were lying on the ground and numerous were injured. They mainly lost their hearing. The obverse side of the coin is then a show of all the inventions that appeared on the four coins. Besides the Columbiad moon cannon there are the Nautilus submarine, the Albatros airship, and the mechanical steam elephant. All of this is comfortably combined with the attributes of the coin issuer, which is the island of Niue. Since the coins of the Czech Mint are based on this foreign license, they carry the profile and the name of the Emperor Elizabeth II. with rotating space projectile, together with the year of the issue 2018 and the nominal value of 1 DOLLAR (NZD).

Keep in mind that you can also find a metal collector´s box decorated with a thematic illustration that contains an attachment in the offer of the Czech Mint.