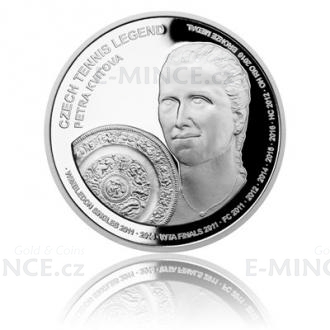 "You may dream of being on a mark, but being on a coin, that's something extraordinary," says Martina Navrátilová about the silver commemorative coin from the cycle "Czech tennis legends" of the Czech Mint.

The art form of the coin is work of the medal maker MgA. Martin Dašek, who has rich experiences with portraits of Czech athletes and other personalities. On the obverse side there is a portrait of Martina Navrátilová, who triumphantly holds the Wimbledon trophy surrounded by english inscription "CZECH TENNIS LEGEND MARTINA NAVRATILOVA", together with a list of her greatest sports achievements. Tennis coins of the Czech Mint are based on the license of a foreign issuer, which is the state of Samoa, and their obverse side therefore bears its necessary attributes, which are the national emblem, the portrait and the name of Queen Elizabeth II, the nominal value of 1 DOLLAR (WST) and the year of the issue 2018. The composition of the obverse side is closed by inscription "WIMBLEDON CHAMPIONS".

The silver coin includes a special czech-english certificate of authenticity that reflects Martina Navrátil´s winning career. Each of the five Czech tennis legends has a place in the collector's etui, which you can also find in the offer of the Czech Mint.