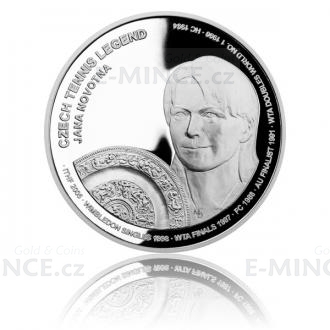 "When Jana Novotná was defeated by Stephi Graf in the Wimbledon final in 1993, I cried after the game. She came to me and said: Mr. Kodeš, do not cry. I will won one day. And then, in five years, she really won Wimbledon," remembers Jan Kodeš, who is the promoter of the series of silver commemorative coins of the Czech Mint called Czech tennis legends the recently deceased tennis player.

One of the best Czech tennis players had an excellent offensive game at the net and dominated all grandslam tournaments, where she won 16 titles. She supported the winning team that won the Fed Cup in 1988. She took second place in the world rankings in 1997 and the New York Championship final in both categories in the same year. At the Olympics she won two silver medals in doubles (1988, 96) and a bronze medal in singles (1996). She attended the Wimbledon Singles final three times and won it in 1998. She loved tennis and devoted it everything. She charmed the whole world with diligence, purpose, discipline and professionalism, but also with her emotions. The unexpected news that she died of cancer at the age of 49 surprised her fans and colleagues not only at home, but also abroad.

Expert medal maker and portraitist MgA. Martin Dasek has traditionally become the author of the coin. On the obverse side he placed a portrait of Jana Novotná, who triumphantly holds the Wimbledon trophy. The tennis player is surrounded by an inscription composed of the English text "CZECH TENNIS LEGEND JANA NOVOTNA" and dates of her introduction in the Tennis Hall of Fame and victory in Wimbledon, WTA and Fed Cup. Sports coins of the Czech Mint are based on the license of a foreign issuer, which is the state of Samoa, and their obverse side therefore carries its essential attributes, which are the national emblem, the portrait and the name of the emperor Elizabeth II, the nominal value of 1 DOLLAR (WST) and the year of the issue 2018. The composition of the obverse side is complemented by the "WIMBLEDON CHAMPIONS" inscription.

Each coin has a special Certificate of Authenticity, which summarizes the tennis career of Jana Novotná in Czech and English. A complete collection of five Wimbledon champions can be stored in a collector's box, which you can also find in the offer of the Czech Mint.