You are here:Home»Czech & Slovak»Czech Mint 2018»Set of two silver medals the Establishment of Czechoslovakia - the eternal dream became a deed 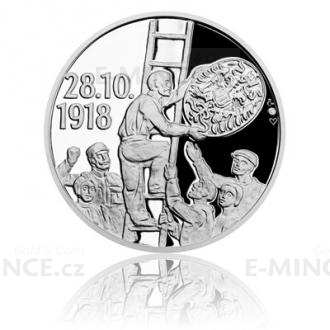 In 2018 we celebrate the 100th anniversary of Foundation of a common state of Czechs and Slovaks. Even though the paths of the two Slavic nations eventually parted, no one will take a common history. The proof is a commemorative set of two silver medals, which is a common work of the Czech Mint in Jablonec nad Nisou and the Slovak Mint Kremnica.

Few people can imagine what the establishment of an independent Czechoslovakia have caused. As evidenced by the Lidové noviny report of October 28, 1918, there was concern that the nation would not pass through patriotic passion: "Wenceslas Square in the afternoon, there were great joy manifestations. Everywhere there was the most excitement, and the car in which Svehla, Rašín, Soukup and Stříbrný sat, was surrounded by an excited crowd. Representatives of the National Committee have said the government statement to the representatives and asked the people to observe the orders of the National Committee unconditionally and to keep order everywhere. Speeches were received with joy. Everyone has done everything so that today's significance is not broken by any denial and eccentricity. The sovereign interest of the nation demands this. The liveliest atmosphere was at the statue of St. Wenceslas in front of the museum. There were the greatest crowds of people, concentrated all their lives, the speakers spoke at the statues, among them also the messenger gardener. Speech was accompanied by unceasing joy. The speakers called the glory of freedom and encouraged the people to order. The National Committee issued a call for peace. The whole Prague was decorated with banners accompanied by the unceasing glamor and singing. The jolly youths were trying to pull the Austrian eagles out of the buildings. The guards watched it calmly. With the military headquarters, it was agreed that he would not take anything against the people and would take care of it. Only the Hungarian colonel told the soldiers and officers that the youths were violently pulling the kokards, sent an armed squad and said he would not listen to anyone but orders from Vienna. The National Committee and the officer settled peace. In the evening, music bands were playing around the city, winning a parade of cheering crowds ... "

The first medal in the set, the author of which is the czech medalmaker academic sculptor Michal Vitanovsky reminds us of these moments. The reverse side presents a man standing on a ladder that pulls a shield with a Habsburg eagle from the building and gives it to a cheering crowd. The obverse side is dedicated to the heraldic features of Bohemia, Moravia, Silesia and Slovakia and a number of linden leaves. The composition of both sides is supplemented by the inscriptions of FOUNDATION OF THE CZECHOSLOVAK REPUBLIC, 28th October 2018.

Slovak medalmaker Štefan Novotný became the author of the second medal in the set. The composition of both sides corresponds to the Czechoslovak flag. The reverse side gives tributes to the capitals of the Czechs and the Slovaks - Prague and Bratislava - and their castles and rivers. The obverse side bears not only the symbols of Bohemia, Moravia, Silesia, Slovakia and Carpathian Ruthenia, but also the old monarchy - the two-headed eagle divides the line between the colors on the flag of the new republic. The inscriptions on both sides represent CZECHOSLOVAKIA, 100th Anniversary of Czechoslovakia, 1918, 2018.

An exceptional international set is set in an elegant wooden etui decorated with thematic graphics.

You know that: Two mints from countries that formed one whole 25 years ago have one common project behind them. It was a successful set of two medals dedicated to the founders of Czechoslovakia T. G. Masaryk and M. R. Štefánik issued in 2015.