You are here:Home»Czech & Slovak»Czech Mint 2018»Set of two medals The Establishment of Czechoslovakia - the eternal dream became a deed 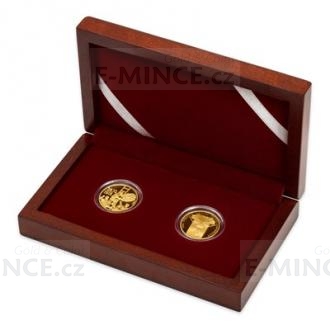 The First World War, which ended 100 years ago, gave us the opportunity to prove that we deserve our own state. Although the existence of Czechoslovakia did not last long in the context of world history, we still remember it. Extraordinary sets of two gold medals were created as a reminder of all the good and bad things that the Czechs and Slovaks have experienced. The Czech Mint in Jablonec nad Nisou and the Slovak Mint Kremnica are equal authors of the sets.

The twenty-eighth of October 1918 is one of the most important days of our history, but it did not look much like it at first. At the time, Lidové noviny did not bother to write about the "declining Austria", to assume "the most famous moment of Czech history" and to mention the "president of the Czechoslovak government of TG Masaryk", but in the noon streets there was still nothing to indicate the famous revolution.

Evidence is the newspaper columnist of Richard Weiner: "We did not hesitate when a friend amongst the speakers mentioned that in the tramway somebody said that Austria capitulated. »Slowly, slowly! This is a little strong tobacco. Let's go to town. "- Dejvicka street. Silence. »You see, rumors! The historic day does not look like this. People are walking too slowly.«- in Klárov. Nothing. - On the Rudolfinum bridge. Nothing different from the other noon. - Kaprova street. Something is happening. What do we know about it? Judge God, but something is happening. - Old Town Square. Special issue of the National Sheets. - It is here! It is in the air. - Austria recognized all Wilson conditions, especially recognizing the claims of the Czechoslovaks and South Slovaks. - Drop! - Železná street, old German theater, Havířská street, Příkopy. First of all, the house of the Bank »Bohemia« falls into the eye. Agreat american battalion on it. We wipe our eyes, kind of a second. Breathless. Then: hands up, all at once: Glory to Wilson! - Confused run of people. - There, he's known. The hands are sprawling. »What is?« - »I do not know!« - »End.« - »Abtreten!« - »We came!«

The overwhelming pleasure of the Czechoslovaks from the newly acquired freedom is expressed by the first medal in the set. Czech medalmaker and academic sculptor Michal Vitanovsky gave the reverse side a man standing on a ladder that pulls a shield with an Austrian emblem from the building and gives it to a cheering crowd. The obverse side presents the heraldic symbols of Bohemia, Moravia, Silesia and Slovakia and a number of linden leaves. The inscriptions on both sides represent FOUNDATION OF CZECHOSLOVAK REPUBLIC, 28th October 2018.

The second medal is the work of Slovak medalmaker Štefan Novotný. The composition of both sides corresponds to the Czechoslovak flag. The left half of the reverse side is dedicated to Prague, Prague Castle and Vltava, the right half to Bratislava, the Bratislava Castle and the Dunaj. The obverse side bears, besides the symbols of Bohemia, Moravia, Silesia, Slovakia and Carpathian Ruthenia, the Habsburg eagle, which the Czech flag splits in half. Composition of both sides is complemented by inscriptions CZECHOSLOVAKIA, 100th Anniversary of Czechoslovakia, 1918, 2018.

An exceptional international set is stored in a luxurious wooden box decorated with thematic graphics.

You know that: Two mints from countries that formed one whole 25 years ago have one common project behind them. It was a successful set of two medals dedicated to the founders of Czechoslovakia T. G. Masaryk and M. R. Štefánik issued in 2015.