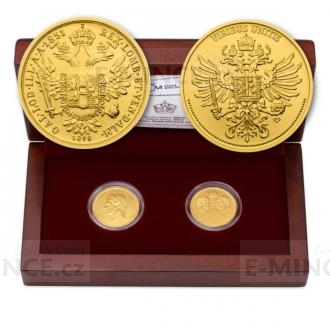 100 years ago, specifically November 21, 1916, breathed his last the Emperor Franz Joseph I. On this occasion, the Czech Mint issues a jubilee commemorative set of two gold ducats. Although the majority of Czechs turned back to the Austrian part of our history, the Czech Mint wanted to honor this important anniversary in a dignified manner and in the spirit of the sovereign’ credo “VIRIBUS UNITIS“ - join forces. The theme selection that emerged on these two mintages, therefore helped members of the Czech Numismatic Society. Each set contains a replica of a period ducat issued to commemorate 50 years of the rule of the Austrian emperor, prepared by the academic sculptor Jan Lukáš. The commemorative medal comes from the workshop of the leading medal maker, historian and the academic sculptor Michal Vitanovský.

"A creation of replicas is, among other things, mainly hard work, but I think that the Czech Mint create beautiful mintages," says Jan Lukeáš, who was at the birth of the Jablonec medal school and whose speciality is precisely modern mintages.

He processed this faithful replica of the anniversary ducat according to the original from 1898.

What is the idea of the second ducat in set? The best answer has its author Michal Vitanovský: "I have been dealing with Franz Joseph I. all my life. For a long time he was unsympathetic to me, until I finally worked out a certain human understanding. As a loose inspiration to me approached the historic medal from the 19th and 20th centuries. From its relief, I took the idea of confrontation between a youth and old age from the example of one man, whose two profiles are looking at each other separated by 68 years."

Both portraits on the obverse are complemented with decorative pearl ovals, an Austrian crown with the years 1848 (sitting on the throne) and 1916 (death), and the inscription FRANCISCUS JOSEPHUS I. IMP-ET-REX. The main motif of the reverse side of the commemorative medal is then a double-headed imperial eagle, accompanied with the emperor’s credo.

To make the ducats stand out, their edge is grooved - an interesting effect that the Czech Mint presents for the first time.

This issue amounts to only 200 complete sets of two gold mintages stored in an elegant wooden etue.