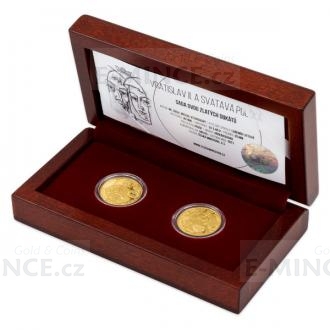 The Czechs experienced historic success on June 15, 1085, when Prince Vratislav II became the first Czech king Vratislav I. The emperor of the Holy Roman Empire Henry IV. rewarded him with this non-hereditary title for loyalty and honor. Vratislav stood by Henry's side on the battlefield and in the political arena, even at a time when he had no other friend left. He supported him especially in the struggle for investiture, in which it was decided whether church dignitaries could be appointed by a secular ruler or a pope. Wrocław's thirty-year government was marked by the growth of the prestige and power of the Czech state, but after his death a quarrel broke out between the Přemyslids. "The widowed Queen Svatava Polská repeatedly tried to reconcile her descendants - the heirs to the throne. Sometimes it was successful, other times not, however, the Přemyslid dynasty survived a difficult period of power instability, ” Michal Vitanovský, an expert on Czech history, explains.

The reverse side of the Queen's Ducat is dedicated to peace efforts - Svatava keeps figures with menacing swords drawn apart. Academic sculptor Michal Vitanovský was inspired by period denarii and a historical fresco from the Znojmo rotunda when creating the reverse side of the king's ducat, which presents Vratislav with a crown, scepter, flag and shield of the Norman type. The obverse side, which is common to both ducats, bears a double portrait of the royal couple. "The historical depiction of Queen Svatava has not been preserved, and the only clue is the considerable age difference between the husband and wife. Regarding life dates, only the dates of death are certain, " the medal maker adds.

The pair of mintages is stored in an elegant wooden box, the lid of which is decorated with personalities of a king and queen symbolized by chess pieces. The packaging also includes an illustrated certificate of authenticity with the author's accompanying word.
Related products