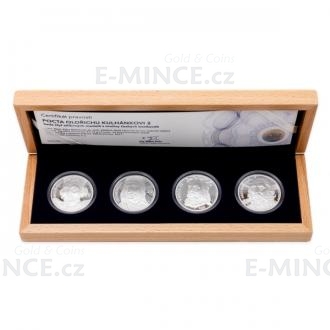 When in 2013 the graphic artist Oldřich Kulhánek passed into eternity, the news hit the Czech Mint hard. For four years they had the honor of working with him on a unique project - the transformation of eight Czech banknotes into commemorative medals. As a tribute to this late author of paper currency, were created a set of four silver medals, on which he could participate. The Czech Mint continued without the maestro’s help. It would be a shame not to continue. Now, four years later, we are proud to present the second silver set.

The four medals are inspired by four banknotes, two of the smallest nominal values can not be found  in circulation:

CZK 200: The obverse of the medal bears the portrait of Jan Amos Comenius, the teacher of nations, the reverse then bears his groundbreaking textbook Orbis Pictus and joined hands of child and adult symbolizing teaching and passing on knowledge.

100 CZK:The obverse of the mintage is dedicated to the bust of King Charles IV. The reverse is filled with a sophisticated historical seal of Charles University, where Father of the Nation kneels before his idol - St. Wenceslaus.

50 CZK: The obverse of the medal is dominated with a portrait of Agnes of Bohemia, the emancipated Premyslide Princess and Czech patron. The reverse the belongsto  the Gothic church vault, the letter "A" and the figures of St. Francis of Assisi and his student St. Clare, who was Agnes’s idol.

CZK 20: The obverse side of the mintage belongs to the portrait of Premysl Otakar I. The reverse bears the crown, ribbon and decorative Gothic seal of Golden Bull of Sicily -  the document that secured the hereditary claim to the title of King of Bohemia for Pfemysls descendants.

The artistic composition of these four medals comes from the studio of MgA. Klára Melichová. The Czech Mint chose her for two reasons - first, she is a talented graphic and secondly, she is the daughter of Oldřich Kulhánek, the sole artist who participated in the preparation of all eight medals. To the academic sculptor Vladimir Oppl, fell the difficult task to convert the sophisticated drawings into a three-dimensional relief model. We are sure, that Kulhánek would have been proud of their work!

Set of four silver medals, along with a certificate of authenticity is stored in an elegant wooden etui.