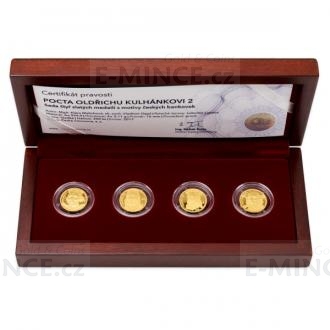 The work of Oldřich Kulhánek, the world-renowned graphic artist and painter, is known to the public primarily through the design of the Czech banknotes, of which the master has created eight. In 2010 he established a cooperation with the Czech Mint and the paper money motifs began to appear on commemorative medals. However, the artist did not live to see the completion of whole series of eight medals - he left us in 2013, therefore he only managed to finish just the first four notes with the highest values. They were published in a set of four gold medals in his honor. Now, four years later, comes another set of gold, which pays tribute to the second half of the legacy of Oldřich Kulhánek.

"Even today when I pay, I look, if they print it well,“ he would say about the banknotes with a smile. He praised the converting of his works into pure gold: "Hats off to all who participated in the process!"  We believe, that he would have loved these mintages, which he did not live to see. The graphic materials were compiled by MgA. Klára Melichová, his daughter and talented graphic designer. The challenging task to convert the eight two-dimensional drawings into a three-dimensional relief, then fell to the academic sculptor Vladimir Oppl. "Oldřich has always had everything perfectly-packed into the smallest detail. I enjoyed working on his proposals, though it often cost a lot of work," added the significant medalist.

The mintages in set were inspired by the banknotes with nominal values of 200, 100, 50 and 20 CZK (last two were withdrawn from circulation, so you will not find them in your wallets). The obverse sides of the individual medals bear the portraits of Jan Amos Comenius, Charles IV., St. Agnes of Czech and Premysl Otakar I. The reverse sides are devoted to attributes of these historical greats - to the textbook Orbis Pictus and the symbolism of sharing experience with the next generation; the majestic seal of Charles University; the  letter A, the Gothic church vault, St. Francis of Assisi and St. Clara; the royal crown, the Gothic ribbon and the seal of Golden Bull of Sicily.

These mintages are stored in a luxury wooden etui bearing the certificate of authenticity.