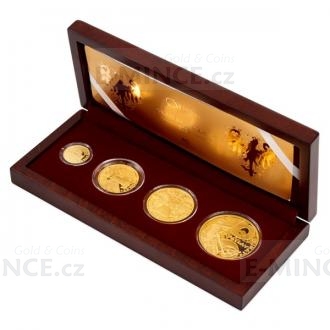 The various ducats of St. Wenceslas play an exceptional role in the history of Czech coinage. In 2021, the Czech Mint has added an extraordinary set of four gold coins, which, in addition to the 1, 3 and 5-ducat, includes a new 10-ducat, which is not available separately.

The story of how the Přemyslid Prince Wenceslas was betrayed and murdered by his brother Boleslaus has become an integral part of our national identity and has been passed down from generation to generation for thousands of years. The tragic death gave rise to a number of legends that have made Wenceslas one of the most popular saints, the patron saint of the Czech lands and the only Czech saint whose feast day is part of the worldwide calendar of the Roman Catholic Church. Therefore, it is no wonder that a number of art works have paid tribute to him - including gold ducats minted by Czech kings and Czechoslovak finance ministers. This glorious tradition is continued by the modern gold ducats of the Czech Mint...

The author of the four-piece set is the medal maker Mgr. Petr Horák. The gold 1-ducat bears the image of St. Wenceslas in the form of a knight with a weather vane together with a depiction of a flaming eagle. The gold 3-ducat is dominated by the national patron as a pious prince and saint, accompanied by a pair of angels. The gold 5-ducat represents Saint Wenceslas as a martyr, while the surrounding motifs - a knight's helmet, a bunch of wine, ears of grain, a rotunda and a hand feeding an infirm man - refer to Wenceslas' virtues, which included chivalry, piety, morality and compassion. The gold 10-ducat presents Saint Wenceslas riding a horse - a scene not unlike the famous statue from Wenceslas Square. The reverse side, which is common to all four mintages, is filled without any residue by a flaming eagle clutching the St Wenceslas sword in its talons. The composition of the reverse side is supplemented with the year 2021.

The set, which has a mintage of only 70 pieces, is stored in a luxurious wooden etui and bears a unique certificate covered with a layer of pure gold.
Related products