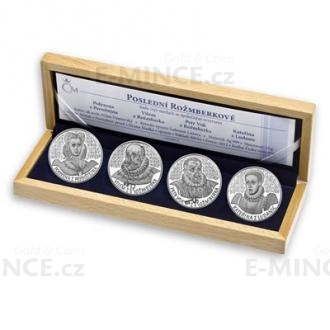 The ‘Last Rosenbergs’ medal set commemorates four last members of the most notable and influential Bohemian noble family as well as the anniversary of the family’s end. Wilhelm and Peter, two Rosenberg brothers and their wives were by nature poles apart and the author of the design, painter Michal Vitanovský, depicted their most characteristic differences. Their portraits on the medals express the traits and attitudes that distinguish them.

Heraldic roses, the Rosenberg’s coat of arms, are featured in the background of the four portraits on the obverse sides. The coat of arms of the south Bohemian family of Rosenbergs was a symbol of a red five-petal rose with a golden centre in a silver field, as the Lords of Rosenberg were one of the family branches of the Vítkovci family. In 1556 Wilhelm von Rosenberg added to the family coat of arms a golden beam with a black snake and alternating red and silver vertical stripes in the lower part. It was a symbol of an ancient royal Italian family, the Orsinis, to which the Rosenbergs were allegedly related. Two bears are often depicted as shield-bearers in the coat of arms because “orsa” in Italian means a she-bear. The last Rosenbergs used bears in their coat of arms and, since the time of Wilhelm, bears have been kept in the Český Krumlov castle moat.

The creation of the medal set depicting the last two Rosenbergs and their wives was inspired by the 400th anniversary of death of the last male descendant of the Rosenberg family Peter Wok, who died in 1611. Peter Wok brought to a close the three-hundred-year-long reign of this illustrious family.

Wilhelm, the highest and reputable Czech noble representative, also performed the highest functions in the Czech Kingdom. Being a tolerant Catholic, Wilhelm was conservative and deliberate. He always managed to defend the interests of the Czech estates, while being loyal to the Habsburg emperors. The medal was inspired, among many, by the late portraits of Wilhelm, when his career was at peak. Wilhelm was a bearer of the insignia of the Order of the Golden Fleece and also one of the few European Catholic magnates.

A libertine and patron of art and science, a grand master of the Order of the Skull

After a rather wild youth, the last Rosenberg, Peter Wok settled down and his attitudes towards his family and the Czech estates became more responsible. Unlike his older brother, Peter Wok was a Protestant and the highest post he could achieve at the Catholic court was the Chamberlain of His Imperial Highness, whose insignia was a key. Under the influence of his wife, Katherine of Ludanice, Wok joined the Unity of the Brethren and later on became an unofficial leader of the anti-Habsburg resistance. The portrait on the medal depicts Peter Wok in his middle years, pointing out that he was the younger brother.

By the Grace of God Princess of Lobkovice, born Polyxena of Pernštejn

Polyxena was Wilhelm’s fourth and last wife, and his last hope to have a male descendant. Her family was as noble and respectable as the Rosenbergs. Half Spanish after her mother, she was a passionate Catholic and gave a great support to the Jesuits. On the medal, she is depicted in a rich dress, a characteristic feature of her South European roots. Her aristocratic origin is symbolised by her poise, facial expression and the jewellery she is wearing. After the death of Wilhelm she married Zdeněk of Lobkovice and engaged in politics by supporting Czech radical Catholic minority.

The last Lady of Rosenberg

Katherine married Peter Wok when she was fourteen years old. She was his first and only wife. She came from a Czech Brethren Moravian noble family. Her emotional instability developed into a serious mental disease which led to her premature death. Same as Polyxena, Katherine did not give her husband an heir. On the medal, her conservative dress and hairstyle, and absence of jewels, symbolise the strictness of her faith. The expression on her face corresponds with her character and sad life story.

The common reverse side of all four medals features the Rosenbergs’armoured horse rider, complemented by the words ‘Poslední Rožmberkové’ (Last Rosenbergs) in circumscription. The renowned figure of the Rosenbergs’ rider has its origin in the equestrian seal and evokes the family’s alleged relationship with the Orsinis. Four hundred years ago the Rosenberg family died out. Members of this Czech noble family that is often described by superlatives such as most influential, most significant, the wealthiest, performed many important functions at the Czech and the Imperial courts.

The medals feature portraits of the Czech history makers.