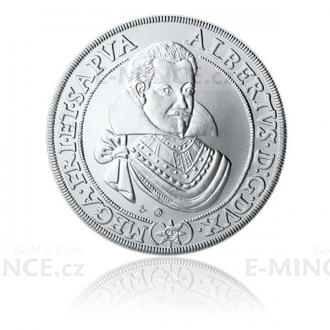 We pay another tribute to historical mints with an issue of a replica of a Jičín thaler Albrecht von Wallenstein from 1629. A unique collection celebrating the craftsmanship of renowned Czech mintmasters was modelled exclusively according to the original historical currency. The professional guarantor of the project was PhDr. Petr Vorel, CSc. By purchasing a historical replica you will enrich your collection with a top reference sample documenting the original appearance of the replicated coins.

Eastern Bohemia’s nobleman Albrecht Eusebius von Wallenstein (1583 –1634) ranked among the most important figures of the Thirty Years’ war. Emperor Ferdinand II bestowed on him many titles and privileges for his skilful diplomacy. Albrecht was also gifted the Duchy of Friedland with the town of Jičín as its centre, where he exercised his right of coinage in 1626-1634.

Due to the necessary international payments, the mint struck a large amount of gold coins, but small silver three-kreutzer coins also accounted for a significant part of the coinage. The mint production was very convenient for Albrecht von Wallenstein, because the coins had to be accepted in full nominal value not only across Bohemia, but also in all regions of the empire under the Habsburg rule. Exceptionally, silver thalers were coined in Jičín as representative currency. After Albrecht’s assassination in 1634, plotted by Ferdinand II who accused him of high treason, the operation of Jičín mint was discontinued and the emperor declared all Wallenstein coins invalid.

The replica of the Jičín thaler from 1629, issued by Czech Mint in March 2014, is a younger version of Wallenstein’s representative coin minted at the peak of his political and military power. The composition of the coin face corresponds to the former Habsburg thalers with one interesting difference that the ruler is depicted frontally, not his profile, as was customary at the time. The bottom edge of the coin features a symbol of the sun, which was the mintmark of mintmaster Jiří Reick who worked at Jičín mint from 1626 to1630. The reverse side of the coin shows complex heraldic symbolism.

The intricate composition is represented on a common shield, under the ducal crown, entwined by the chain of the Order of the Golden Fleece. The so-called heart emblem features the ancestral coat of arms of the Wallenstein house surrounded by coats of arms of territorial principalities under the rule of Wallenstein. The symbol of the Duchy of Mecklenburg occupies the most important heraldic first place, followed by coats of arms of other territories according to the inscription translated into Czech: Albrecht, by the grace of God Duke of Mecklenburg, Friedland and Sagan, Prince of Venetia, Earl of Schwerin, Lord of Rostock and Stargart, 1629.

The model for this replica, designed by the leading Czech expert on creating replicas, academic sculptor Jan Lukáš, was a coin from the collection of Východočeské Museum in Pardubice, sign. N 241.2330. The Jičín thaler Albrecht of Wallenstein is issued in an edition of 1,000 pieces.

This coin will enrich your collection with another important part of Czech history.