Platinum investment medal Gothic, The Church of Mother of God before Tyn - stand » 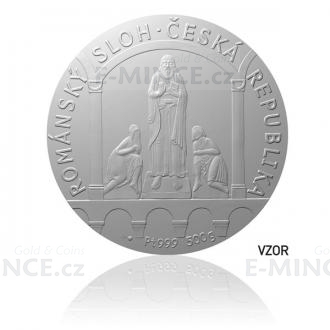 A series of platinum medals, weighing one half a kilogram, was closed by the Czech Mint in 2016. These mintages were the largest of their kind in the world and were made according to a beautiful sacred architecture. A new cycle of record platinum medals introducing the core architecture style will follow in 2017. The first issue belongs to the Romanesque style.

European art from the end of the 10th to the 13th century is known as a Romanesque style. It appears in the architecture, painting, sculpture and other artistic crafts, and the way of life of the whole society in the style of complex Christianity builds its integral part. The Church of St. Jacob in Jakub near Kutna Hora is then the first Romanesque monument in the Czech lands. A sealed box showing the precise moment of the church's foundation on November 19, 1165 was revealed after centuries of conjecture, which means during the reconstruction in 1845."The Church of St. Jacob is one of the most important Czech monuments of Romanesque architecture and sculpture. Its uniqueness lies not only in the almost intact building form, which has been preserved since its creation, but especially in extraordinary sculptural decorations, " explains PhDr. Kateřina Nora Nováková, Ph.D., expert advisor of the cycle. The sculptural decoration is very rich in iconography. It presents Jesus Christ, the angels, the apostles Peter and Paul, St. Wenceslas, Bishop Prokop and Vojtech, the martyr and founder of the Church of Slavibor and Paul, and of course, the St.Jacob after whom the church was named.

An expert medal maker Mgr. A. Jan Hasek became the author of the sophisticated relief of the medal. While the reverse side is dominated by the overall view of the Romanesque church, the obverse side belongs to its unique decoration, specifically to the figures placed in the arcade on the floor: St. James with the kneeling figures of donors Slavibor and Paul on the sides stands in the middle. Inscriptions of both sides bear THE CHURCH OF ST. JACOB IN JAKUB NEAR TO KUTNA HORA- ROMANESQUE STYLE – THE CZECH REPUBLIC.

A special certificate of authenticity and an accompanying brochure with the text PhDr. Kateřina Nora Novakova, Ph.D., which presents the Romanesque style and the ancient Czech monument is part of each of only 12 platinum medals.