« Platinum investment medal Gothic, The Church of Mother of God before Tyn - stand 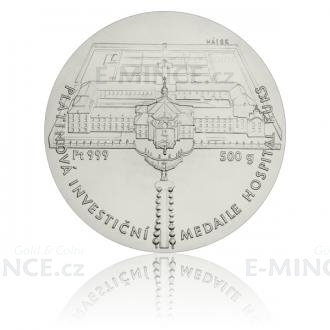 A series of investment medals minted from one half kilogram of platinum, which is dedicated to the jewels of our religious architecture, reached its end. The last minting - the largest of its kind in the world - the Czech Mint devoted to the Kuks hospital with the Church of the Holy Trinity.

The Hospitals once served as a shelter for the weak and infirm. At the beginning of the 18th century the Count František Antonín Špork founded one such ‘hospital’. It was in the village Kuks near Jaroměř, where the healing spring flowed out. That gave rise to a renowned spa, the church and the resting place for retired soldiers, who were taken care of by the Brothers of Mercy. The Kuks complex, however, did not serve only to charity - it became primarily an island of baroque art and social center, where the bohemians, artists and intellectuals from all over Europe descended. In the spirit of the baroque principles of contrast, here life collided with death and spiritual meditation with physical indulgence.  The contradictions of beginning of the 18th century still represents a monumental set of statues of Virtues and Vices by Matthias Bernard Braun, which is a masterpiece of European Baroque.

A platinum, which is very hard, requires an experienced medalist. The author of the artistic design of the medal thus became Mgr. A. Jan Hásek, who replaced the late Jaroslav Bejvl.

The obverse side of the medal shows the view of the hospital from a height that reveals the entire area in all its glory. The reverse then belongs to the person of the founder of the hospital - his name and the majestic family emblem of the Špork. An integral part of every medal is a COA printed on handmade paper and decorated with a cold stamping technology.

Do not miss the final piece of the platinum puzzle, which is unprecedented worldwide - Kuks Hospital is being released in just 12 numbered pieces.

In 2017 we will present a platinum mintage of heavy grammage with a new theme!