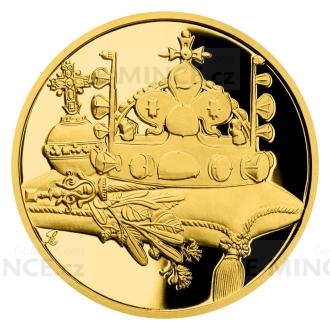 The nobility, majesty and power of the state and its representatives - all this is hidden under the word majesty. Majesty is usually expressed by a number of symbols in the form of titles, ranks, documents or badges, and Czech history can offer an infinite number of them. Some of them are presented by the Czech Mint on the third Majestic ducat.

The Czech lands have been a proud kingdom for centuries, and although more than 100 years have passed since we won the republic, we remember our distant history with respect. The Czech coronation jewels - a set of a royal apple, a royal sceptre and the St. Wenceslas crown, which Charles IV had made on the occasion of his coronation, belong to the most important relics of old times. The lavishly decorated jewel was made of gold and precious stones, but the thorn from Christ's crown of thorns was its most valuable part, which ensured that the Czech king was symbolically crowned with the same crown as the Son of God. The name of the St. Wenceslas Crown referred to Přemyslid traditions and thus to the very idea of the Czech state. Surprisingly, the crown was not the personal property of the king. Thanks to St. Wenceslas, the saint patron, it belonged to the whole nation and embodied the unity of all the lands of the Czech Crown. Thanks to these noble ideas, unlike many other European crowns, it has not been lost …

You will find the coronation jewels on the obverse side of the golden ducat from the workshop of the medal maker Ludmila Kracíková, DiS. The crown, apple and sceptre lie on a pillow and they are supplemented with a linden branch. The reverse side is dominated by the inscription CZECH REPUBLIC surrounded by heraldic animals - a Czech lion, a Moravian eagle and a Silesian eagle.

The majestic ducat is an attractive and valuable gift for important occasions. It includes a unique certificate of authenticity that bears a plastic text supplemented with a decorative relief and which is covered with a layer of pure gold.