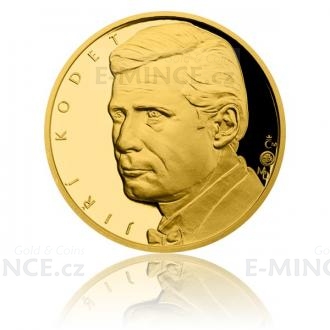 Jiří Kodet's film career has lasted more than four decades. During that time, he played a plenty of small and episodic roles, with the greatest ones coming at the end of his life. However, it is not small roles, just small actors as the well-known wise says. Of course, Jiří Kodet did not belong to them. He provided even the most peripheral figure with unmistakable aura. In the minds and hearts of the public, however, he remains foremost a choleric father Kraus, a three-inflicted war disabled person, and a stubborn anti-communist regime from the legendary Pelíšky movie. The film was enthusiastic for the audience, it was included in the golden fund of Czech cinematography and a number of "announcements" in a unique rendition by Jiří Kodet became popular in public. Pelíšky movie was also criticized and received a number of prestigious awards, including three Czech Lions. Jiri Kodet was awarded one of them for best male acting. But the great reward for him was the role itself. He enjoyed filming, and he was given the opportunity to expel all the feelings that had accumulated in his life. It was his personal experiences and injuries that gave the film an authentic atmosphere. Kodets´ friends does not hesitate to admit that he did not play his most famous role. He was, in fact, not a shriek, but a man in pain, anger at injustice and, above all, a huge feeling.

The unforgettable sentence from Pelíšky "I GIVE BOLSHEVIK A YEAR, MAXIMUM TWO"  decorates the reverse side of a medal that is dominated by a film roll, from which a celluloid belt with a number of faces of Jiří Kodet unfolds, including Mr. Kraus. The obverse side is dominated by a charismatic civil portrait of a young artist, complemented by inscription JIŘÍ KODET. Expert portraitist MgA. Martin Dašek became the author of the commemorative mintage of the Silver Screen Stars series.

Each medal is placed in a special packaging that tells the acting and personal story of Jiří Kodet.