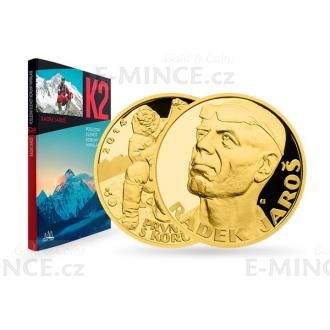 Radek Jaroš was not included among the best Czech mountaineers "only" due to his exceptional sporting achievements. Many times he also demonstrated, that for him climbing is not just a game of power, but that he put the sporting behavior and human responsibility higher than this own goals. Among other things, it also illustrates the Fair Play award in 2008, when he during hill climbing on Dhaulagiri in extremely dangerous conditions without hesitation rescued, along with Zdeněk Hrubý, several other climbers.

He managed to conquer Dhaulagiri, the Himalayan beauty, the seventh highest mountain in the world, as well as 13 other eight-thousanders of the planet, completely free of doping – climbing porters and artificial oxygen. And it also makes Jarek Jaroš very special athlete, whose tribute in the form of a qurter-ounce gold investment medal was prepared by the Czech Mint. The author of both parts is Vojtěch Dostál, Dis., who brilliantly captured the Radek Jaroš`s expression in the portrait adorning the obverse side of the medal. For the reverse side he prepared very emotional moment, when Radek Jaroš is holding the Czech flag on the last of the hills, which had resisted him for a long time - the dream K2. 26 July 2014, at the age of fifty years, he won his dream title the Crown of the Himalayas. A beautiful collector's medal will also serve as an ingenious investment with great assurance of evaluation of your finance. The issue is limited to only 200 pieces, therefore book it on time!

Radek Jaroš (* 29th April, 1964, Nové Město na Moravě) yielded to tempation to conquer the peaks beeing a child. At the beginning he touched our mountains, then he conquered the Tatra Mountains, Tian Shan, Pamir and the Himalayas. He firstly teased Mount Everest in his early thirties, but without success. But he firmly reiterated his climb, and less than four years later, along with Vladimír Nosek, they reached the peak without using oxygen masks. At the age of 42 years Radek Jaroš could boast of having conquered six eight-thousanders, however, he set a goal of conquering them all. Thus followed the Kanchenjunga in 2002 and the Climb in 2004 - the Scott McIntyre`s way to Shishapangma, he did in alpine style and - of course - without using oxygen. Makalu and Dhaulagiri lived to see his visit in 2008. He celabrated his 45th birthday stylishly Radek Jaroš – the solo climb on Manasla. A year later, with Libor Uher within ten days they climbed on Gasherbrum II and Gasherbrum I. The fourth highest mountain in the world Lhotse welcomed Radek in 2011, that year he also conquered Annapurna. It lacked only one mountain to get the Crown of the Himalayas, the fatal K2. Several times he unsuccessfully tried to conquer it. However, by 2014 the majestic beauty ceased to resist and Radek Jaroš became the fifteenth person in the world and the first Czech who managed to climb all 14 eight-thousanders without artificial oxygen.