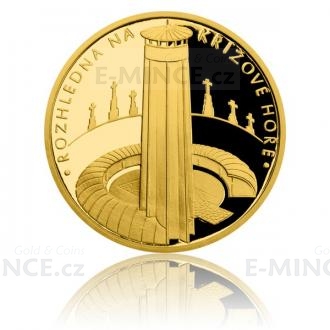 The Observation Tower collector´s series introduced by the Czech Mint presents its penultimate issue. The gold quarter-ounce medal is dedicated to the observation tower which is situated on Cross Mountain in the Pardubice Region.

The Cross Mountain served for centuries as a place of pilgrimage and became a popular cruise spot with the onset of the tourist season. After the Second World War, however, the area had changed into a military training ground and the flow of visitors stopped. Local beauty was hidden from the public for decades. When the army finally left, only devastation was left behind. Efforts to restore the lost glory of the region did not succeed until 2006 when the building of a modern observation tower began on Cross Mountain. Not only tourists but also pilgrims who wished to walk through the ancient crusade were considered in the planning. A stone altar, a restored cross, after which the mountain was named, forms part of the observation tower. It commemorates the church that had been there since the first half of the 19th century ín the form of a marked ground plan.

The spiritual and touristic character of Cross Mountain also combines a relief of the commemorative medal made by expert medal maker and academic sculptor Zbyněk Fojta. The obverse side of the mintage bears an overall view of the building - a reinforced concrete tube surrounded by an enclosed space for organizing social events. Behind the tower there are six crosses symbolizing the cross path. The reverse side bears a detailed picture of the cross standing near the lookout tower together with a view of the construction from its heel, which emphasizes the vertical rib bracing. The inscriptions include the name of the lookout tower, the height of the building which is 25m and the altitude 735 m above sea level.

Keep in mind that the Czech Mint has prepared for collectors an even more luxurious etui, which will take the complete series of all 12 beautiful look-out towers.