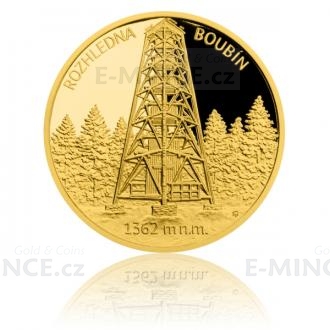 The look-out tower, standing on a hill of the same name, is among the youngest in the country. It was closed for the tourists till 2005. The hill, which is surrounded by an ancient forest, however attracted the visitors much earlier. Even the Cardinal and the Prague Archbishop Friedrich Schwarzenberg went there in 1867 - this visit proves a stone memorial obelisk. The first simple construction was built on the Boubín as early as 1878. A significant peak altitude was used by the land surveyors and in the first half of the 20th century was formed several triangulation points. When in the early 60s disappeared the last one, there was built a military observation point on Boubín, which served as a look-out tower, up to the year 1976. The construction of a modern tower, which was completed in 2004, was accompanied by a considerable controversy - the reason was its location in the heart of the protected area with a unique ecosystem.

The author of the visual image of this commemorative mintage is a medal maker Asamat Baltaev, DiS. He dedicated the obverse side to a view on the look-out tower - a beam tower of spruce logs - among the trees. The inscriptions on the obverse says the LOOK-OUT TOWER BOUBÍN and the altitude 1362 m n. M. The reverse side then provides a view from the look-out tower on the mountain panorama, which shows the dominant surrounding peaks SOLOVEC, BOBÍK, LYSÁ, KLEŤ, KNÍŽECÍ STOLEC, ŠPIČÁK, CHLUM, JEDLOVÁ HORA and VÍTKŮV KÁMEN.

In the menu of the Czech Mint you will also find a luxurious collectible etui for all the medals from the cycle the Look-out towers.