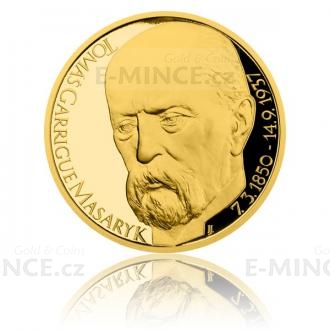 Tomas Garrigue Masaryk is one of the most important personalities of our history. 80 years have passed since his death. The Czech Mint has issued a commemorative medal made of one ounce of pure gold as a memory of the pure character.

T.G.M. has become a legend during his life, and it is no wonder that the news of his last hours has been welcomed by the public with concealed breath. In Lane where he lived, his children, President Edvard Benes with his wife and Prime Minister Milan Hodza stood beside him. Also millions of Czechoslovak citizens were with him through press and radio, which regularly informed about the development of "father´s" heavy lung inflammation. Prague's diplomatic corps received thousands of phone calls and telegrams and even the foreign ministry did not hesitate - official information about the health of the head of the state was also demanded by people from abroad, including the top state officials. "The President Liberator" died on September 14, 1937 - the information was told by his son Jan in simple words: "Father died at 3:29." The nation was deeply affected by the news. "Tomáš Garrigue Masaryk, the Liberator, the spiritual creator and the first president of the Czechoslovak Republic, has elapsed today. This is the end of his three-year struggle with death, a struggle in which the human body is never the final winner. We must accept this death with resignation and humility, " wrote Charles Capek. The poet Jaroslav Seifert then say goodbye to the President through the following verses: "In a hundred years maybe the children of our children will be telling their children about the gray morning on the fourteenth of September forever marked in the calendar."

The sad date is also indicated in the calendar of the leading medal maker and academic sculptor Jan Lukas, who dedicated a commemorative medal to our first president. The obverse side is dominated by his charismatic but troubled portrait surrounded by the description of TOMAS GARRIGUE MASARYK, ​​March 7, 1850 - September 14, 1937. The reverse side carries a Czechoslovak emblem in the form of a two- tailed lion suplemented by a list of Masaryk's life tasks - PHILOSOPHER, HUMANIST, DEMOCRAT, PEDAGOG, WRITER, FOUNDER AND THE FIRST PRESIDENT OF CZECHOSLOVAKIA.