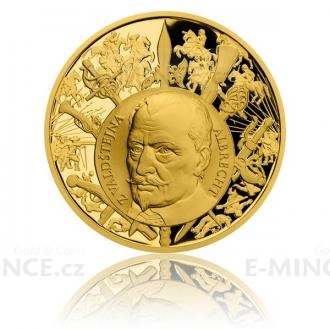 Another gold medal of the author's series of History of Warcraft by the academic painter Karel Zeman represents one the most significant Czechs in history - Albrecht von Wallenstein - as a commander in a spectacular battle of Lützen.

In 1632 the Thirty Years War was raging at full blast. At the head of troops of the Catholic League stood Wallenstein, a brilliant strategist, and a powerful representative of the Holy Roman Empire. His opponent was more than equal, with nobility as well as war experience - at the head of the Protestant troops stood Gustav II. Adolf himself, the king of Sweden, who made great power from his country, and a great military reformer, whose procedures are followed by warriors today. The place of their fateful conflict was the plains near the town of Lutzen, where on November 16 the Swedish troops invaded the entrenched enemy, and quickly robbed them of their position. Wallenstein, who personally commanded his troops, repelled them only by exerting all forces and was wounded. Also Gustav II. Adolf honored the battlefield with his presence, which proved fateful - he fell during a clash with the elite cuirassiers. The Catholics eventually had to retreat, but for the Swedes it was a bloody Pyrrhic victory, which negatively affected the rest of the war.

The academic painter Karel Zeman has dedicated the reverse side of the medal to this battle, which  resulted in tragedy - the Swedish King falls from his horse towards his death and the battlefield beneath him is littered with twisted skeletons, symbolizing the nine thousand men killed on both sides. The inscription LÜTZEN 1632 is complemented by the Latin text GUSTAV ADOLF MORTUUS EST  - ie "Gustav Adolf is dead." The obverse of the mintage belongs to the portrait of Albrecht von Wallenstein, who is surrounded by the instruments of the Thirty Years War - cold firearms, cuirassiers, pikemen and musketeers.

Each of the 100 numbered pieces of gold medals is accompanied by special certificate of authenticity, that includes historical text and accompanying commentary of author.