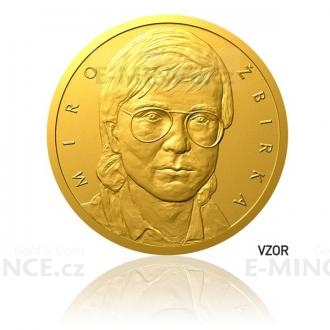 The collectible set of "Nightingales in gold" welcomes Miroslav Žbirka, who on the occasion of his 65th birthday gets his own gold medal of the Czech Mint.

A singer, guitarist and author of a melodic songs is better known under his nickname "Miro" or "Meky". How did it happen? "My friend from the street gave it to me in the childhood. When the Canadian hockey team arrived to host Slovakia, a lot of them were called Mac. I also spoke English, so I got called Meky, " explains the singer. This boy, who loved the Beatles certainly did not know that he is going to become the first Slovak winner of the prestigious music award Golden Nightingale in 1982 . At the same time, he managed to do something what only Waldemar Matuška had done before him – he defeated Karel Gott. Since then, he is one of the most famous singers of popular music scene in the Czech and Slovak Republics. Moreover, he is also well regarded beyond the borders of his homeland.

The author of the artistic design of this commemorative medal is an expert medal maker MgA. Martin Dašek. Both sides are dedicated to the two completely different heads - one belongs to the singer, the other to his guitar, but both carry the distinctive glasses, which essentially belongs to Meky. The inscriptions then indicates MIRO ŽBIRKA - Golden Nightingale of 1982.

Once the first 100 numbered pieces of the half-ounce gold medals are sold out, the remaining 200 pieces of the issue will be released to the sale. You can store them in an elegant collectible box, which can also be found in the menu of the Czech Mint.