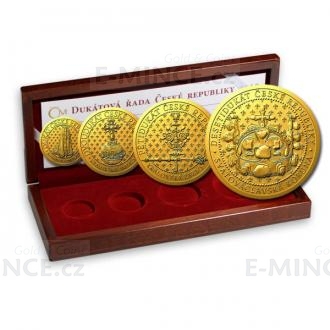 The Bohemian Crown Jewels, also called the Czech Crown Jewels (Czech: České korunovační klenoty), include the Crown of Saint Wenceslas (Svatováclavská koruna), the royal orb and sceptre, the coronation vestments of the kings of Bohemia, the gold reliquary cross, and St. Wenceslas' sword. They were originally held in Prague and Karlštejn Castle, designed in the 14th century by Matthias of Arras. Since 1791 they have been stored in St. Vitus Cathedral at Prague Castle. Reproductions of the jewels are permanently exhibited in the historical exposition at the former royal palace in the castle. The crown was made for the coronation of Charles IV in 1347, making it the fourth oldest in Europe. (source: http://en.wikipedia.org/wiki/Bohemian_Crown_Jewels)