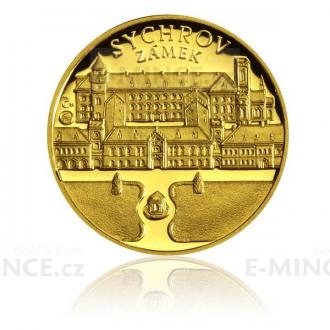 The history of the castle dates back to the 15th century. The original fortified settlement was later rebuilt into a stone mansion and, at the end of the 17th century, into a small Baroque castle. The building’s biggest metamorphosis began in 1820 when the Rohan family started a major reconstruction of the castle complex. The Rohans ranking among ten most influential noble French familes came originally from Bretagne. After the French Revolution one of the sides of the Rohan House left France, moved to the Austrian monarchy and found a new home at the Sychrov Castle. The first owner rebuilt the shabby small Baroque castle into a grandiose building in the Empire style. The reconstructions continued and the castle’s present Neo-Gothic style appearance dates from the 19th century, from the period of duke Kamil Rohan. Many Czech artists and craftsmen contributed to the high artistic value of the castle’s interiors and exteriors. Duke Rohan also paid great attention to the landscaping of castle gardens and parks. In this period, a rare harmony was achieved of all exteriors of buildings, furnishings and decoration of interiors, as well as parks and gardens.

Extensive reconstruction and restoration works are presently carried out in what is today a state castle with the aim to return to the castle complex its Neo-Gothic looks it had in mid 19th century.

On the obverse side of the medal the castle is depicted from a bird’s eye view. Thanks to this, the exterior lines and the diversity and size of individual structures stand out, as well as two dominants of the castle– the Bretagne and the Austrian towers. Bird’s-eye-view also enabled the artist to include part of the garden with a summer-house in the overall picture of the castle.

The text is circumscription in the upper part reads SYCHROV ZÁMEK.

A fragment of interior decorations is featured in the bas relief on the reverse side, namely part of the ceiling in the princes’ hall from the North wing of the castle. Two lions at the sides hold the Rohan family’s coat-of-arms, a divided shield, placed in the centre. A princely crown with a pall is featured above the shield.