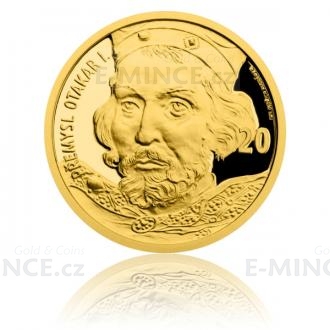 Year 2017 is the last, when the Czech Mint issues gold medals inspired by the masterpieces of Czech banknotes, which emerged from the studio of Oldřich Kulhánek. Besides the mintages weighing one kilogram and  the 40 ducat, the portrait of Premysl Ottokar I. - well known from no longer valid banknote with a value of CZK 20, also appears on commemorative miniatures.

Premysl Ottokar I. is one of the most important figures in our history - he saved the country on the brink of collapse and made it strong and respected European kingdom. Although he was only the third Czech king in history, he was the very first, who managed to secure the royal title in order for their offspring to inherit it. It was the famous Golden Bull of Sicily, which enabled him to do so. Frederick II. granted it to Premysl Ottokar as a reward for helping in the fight for the imperial crown. Because Frederick was not yet the Roman king at that time, thus did not have the imperial insignia, he affixed a set of documents with Sicily seals, to where he ruled.

The Seal of Golden Bull of Sicily is one of the main motives of the reverse side of this gold medal. The other two motifs of the reverse are then a dominant royal crown and ribbon decorated with Gothic motifs and jewels. The obverse side belongs to a large portrait of the charismatic ruler, an inscription PŘEMYSL OTAKAR I. and numeral 20, which refers to the nominal value of the paper original. The processing of the visual image of the medal undertook two artists - a graphic designer  MgA. Klára Melichová, who has prepared the the composition of both sides of the medal and who is the daughter of the late Oldřich Kulhánek, and a medal maker academic sculptor Vladimír Oppl, who has prepared the embossed draft of the mintage.

Do not miss the last piece of the puzzle, which pays tribute to the eight great personalities of our history and one great artists.