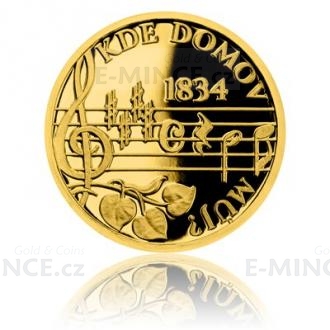 A series of commemorative coins made of half a gram of pure gold, which were set in replicas of period postcards, were only recently issued, but have already become one of the favorite issues in the offer of the Czech Mint. A gold mini medal exceptionally appears on the postcard instead of the gold mini coin in 2019. Its main theme is the play Fidlovačka, or No Anger and No Brawl, which was introduced together with the future Czech anthem 185 years ago.

The broad range of postcards created at the end of the 19th century includes a group of so-called genre postcards. In addition to congratulatory prints, there are patriotic postcards. These were popular not only as a form of communication, but also served as an educational tool in schools. Window lithography with motifs of Bohemia, Moravia and Silesia, which served as a proposal for medal packaging, was published in 1900. The print presents not only heraldic symbols of the Czech lands, but also their sightseeing places - Hradčany, Vyšehrad, Pernštýn, Velehrad and Říp mountain surrounded by an inscription KDE DOMOV MŮJ?, which refers to the song of the same name. The future Czech anthem by Josef Kajetan Tyl, who wrote the words, and František Škroup, who composed the music, was first played in Fidlovačka, or No Anger and No Brawl on December 21, 1834 in the Estates Theater in Prague.

Relief of commemorative medal, which was made by the medal maker Asamat Baltaev, DiS., presents an inscription KDE DOMOV MŮJ?, part of the musical notation of the song, the year of its creation 1834 and patriotic symbolism - silhouette of Hradčany and linden branches.

An issue that delights both numismatists and philocartists is an addition to the collection as well as a valuable gift or regional present. It is also interesting that the Czech Mint dedicated a postcard to the Estates Theater in 2019.